During his inauguration speech after taking his oath, President Bashar al-Assad reaffirmed his commitment to bolstering the Syrian economy, SANA reports. 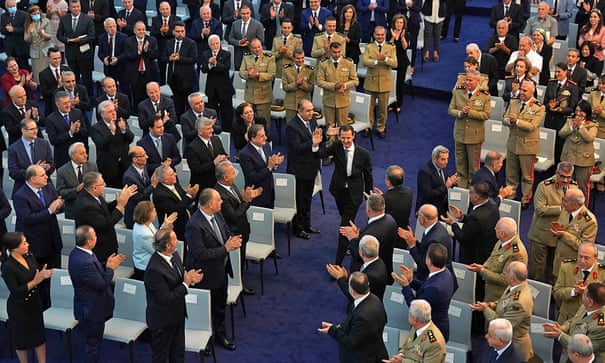 President Bashar al-Assad took the constitutional oath on Saturday before the Speaker and members of the People’s Assembly in the presence of political, party, media, religious figures, and families of the martyrs and the injured. The economy occupied a large part of his speech.

Following the oath ceremony, President Assad delivered a speech saying that through awareness and national belonging, the Syrian people have proven that their determination to defend their rights won’t weaken in the face of colonial schemes to spread chaos in Syria. Through national unity, they have shot the coup de grace at the projects that targeted the homeland.

The following are excerpts from President’s Assad speech as published by SANA:

The President stressed that popular awareness is the criterion to judge our ability to distinguish between treason and patriotism, revolution and terrorism

President Assad affirmed that the stability of society is at the top of postulates and anything that affects its security and safety is absolutely rejected as any society that does not consolidate or respect values cannot be a stable or prosperous one.

President Assad said that the Syrians inside their homeland are increasing their determination, but those who were displaced are used as “a mere card” against their homeland… this phenomenon has proven the power of the popular legitimacy given by the people to the State… it has been able to turn the occasion from a constitutional procedure into a political act that defeated the most dangerous proposals to which our enemies have persisted since the first weeks of the war, when they tried to convince us with suspending the standing constitution at that time to create a vacuum that leads to chaos, in one side, through several Syrian traitors, or messages conveyed to us by different mediators in another.

The President added that those proposals which continue until today and have been prepared by some agents aim to reach a constitution that puts Syria at the mercy of foreign powers, but these attempts have vanished under the Syrian people’s resilience.

The President said, “I repeat my call on all those who have been deceived and bet on the collapse of the homeland and on the fall of the state to return to the lap of the Homeland because these bets have fallen and the homeland has remained.”

President Assad added, “our trust in our army that it will achieve liberation even after a while… and our belief in ourselves, our history and our civilization…this trust has achieved the impossible, and this is what we need today to confront the economic war.”

“The next stage, in the framework of investments, is to concentrate on investments in alternative energy as the solution to the electricity problem is a priority for all of us.”

President Assad added that the people who have carried on a fierce war and regained most of their lands are certainly able to build their economy during the most difficult circumstances and with the same will and determination.

President Assad went on to say that “we lose when we believe that self-distancing is a policy and it will protect us from fragments of chaos in our surroundings, or when we believe that issues surrounding us are isolated from our cause, and we win when we deeply understand that the closest of those issues to us is the issue of Palestine.”

“ Liberating what has remained of our land is a priority, its liberation from the terrorists and their Turkish and U.S.  sponsors,” President Assad said.

President Assad added, “We salute and appreciate every patriotic Syrian citizen in the northeastern regions who has withstood in the face of the U.S. occupier and tried to expel it while he was unarmed, confronted mercenary agents and offered martyrs.”

“When we return to 10 years ago, all of us know what has happened at the beginning of the war, but few have analyzed the reason behind what has happened… all of us talk about the way to get out of the tunnel, or to be more realistic about how to solve the problem… we have to set off for the next stage with a conclusion… it is not enough to say that our problem in Syria is terrorism or extremism that led to terrorism, this is one side, but here I mean those who are part of the society, they are individuals who have characteristics to be integrative, but they lack the intellectual and moral reference… this reference defines the relation of the individual with his/her surroundings,” President Assad said.

“Our obsessions today are mostly liberating what has remained of our land and confronting the economic and livelihood repercussions of the war… and if we see that the security situation is stable today, this would have never been achieved without our belief in the army and our support to it,” the President said.

The President added that the war of keeping the exchange price has proven that the capabilities are there, but they are in need to be seen and know how to use them, while in the field of investment, it is enough to inspect the numbers which reflect the number of investment facilities under construction, or those which have continued work under shelling or blockade.

The biggest obstacle currently is the frozen Syrian deposits in the Lebanese banks, which are estimated at tens of billions, and the continuous pressure on the Syrian pound and attempts to drop its purchasing value over the years successively.

“Reducing obstacles is necessary, but it does not compensate for the increase in production, which is the basis for improving the economy and the living situation, therefore, the title of the next stage should be increasing production and the role of the State is to open the doors wide for investment in all industrial, tourism and service fields, the most important of which is of course agriculture and for various large, medium and small spectrum and this what we have worked on to improve the investment environment,” the President said.

President Assad added that the next stage is for transparency as automating services and providing them electronically and launching the electronic payment service is the essence of developing procedures, which prevents corruption, waste, and achieves justice and equal opportunities.

Read Also: Israel Refuses To Comment on Meeting With Syrian Delegation in Hemeimeem

President Assad said that the upcoming period is about updating laws to keep pace with time, as exceptions are canceled, except what requires that, but within clear restrictions and criteria fighting discrimination and achieving justice. “We have started on this issue since nearly two years ago and we are also taking steps forward, and for the same reasons there are large numbers of laws and lack in cadres make steps forwards slow, but in general, it is an approach and we are committed to going ahead in it without suspension.”

“The upcoming goal is to continue and expand the fight against corruption, which has not stopped one day, and there will not be any suspension to this process or leniency with any person involved, because it is a big gap and ending it is an economic, social and patriotic necessity,” the President added.

“Israel did not win the war when it occupied Palestine in 1948, but it came closer to victory when some of the Palestinians and Arabs believed that humiliating concessions would restore rights,” the President stressed.