The Syrian regime is trying to classify people into two categories: the loyal ones who stayed and the traitors who fled, according to Enab Baladi. 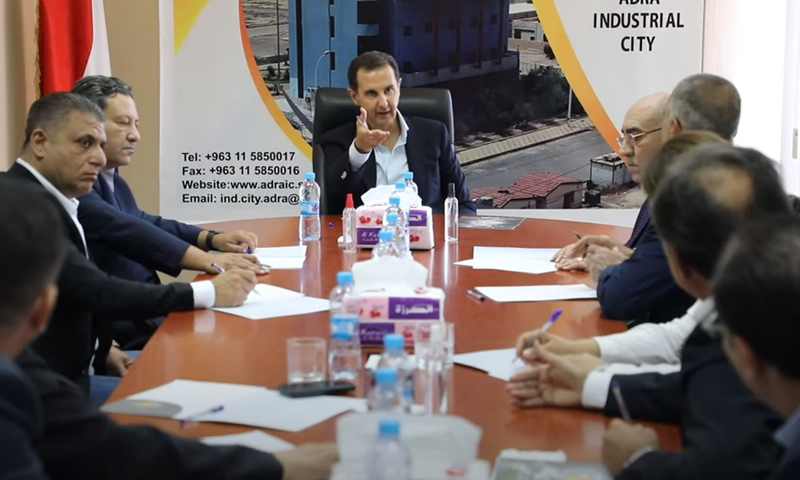 During his visit to the industrial city of Adra in the governorate of Rif Dimashq on June 9th, Bashar al-Assad praised loyal businesspeople who stayed by his side, promising to provide them with the facilities they need.

Assad visited Adra only 37 days after his visit to the industrial city of Hassia in rural Homs and his “victory” in the May presidential election.

The Syrian president said that the reason for his visit to the city of Adra was to emphasize the primacy of economic issues in the upcoming stage, including how to overcome the obstacles facing the productive sector in general in Syria.

During his recent visit, Assad deliberately praised businesspeople who supported him, while criticizing those who left Syria. He pointed out that capital alone is insufficient during a war to “build the country and its economy,” and that “will and patriotism” are also essential.

Assad promised industrialists the support of the state. He stressed that the state would stand by their side. “They deserve all possible support and encouragement because they are fighting an economic war while working. They are on the labor front.”

The head of the Syrian Economic Working Group, Dr. Osama al-Qadi, commented on Assad’s statement, noting that the Syrian regime insists on classifying people into two categories: those who stayed and are loyal to the state and those who fled and pretended to be rebels.

Qadi told Enab Baladi that Assad wants to send messages that the investors (business owners) who decide to stay in Syria “despite corruption, improper management of the Syrian crisis, the presence of foreign militias and armies, and the division of Syria into three areas of influence, are considered as “patriotic.” And while those who left to save part of their assets are seen as “traitors to their state,” just because they fled violence.

Assad’s statement indicates a shortcoming in his analytical thinking and sends negative messages to business people and industrialists, including his supporters. These messages show that the Assad regime’s mentality is repulsive and not inclusive, and the state is not for all the Syrian people. Such messages increasingly fragment and weaken the Syrian economy, according to Qadi.