Iran is trying to expand its influence on the Jordanian border by filling the void left by Russia after the agreement signed to lift the siege in Daraa al-Balad, according to Baladi News. 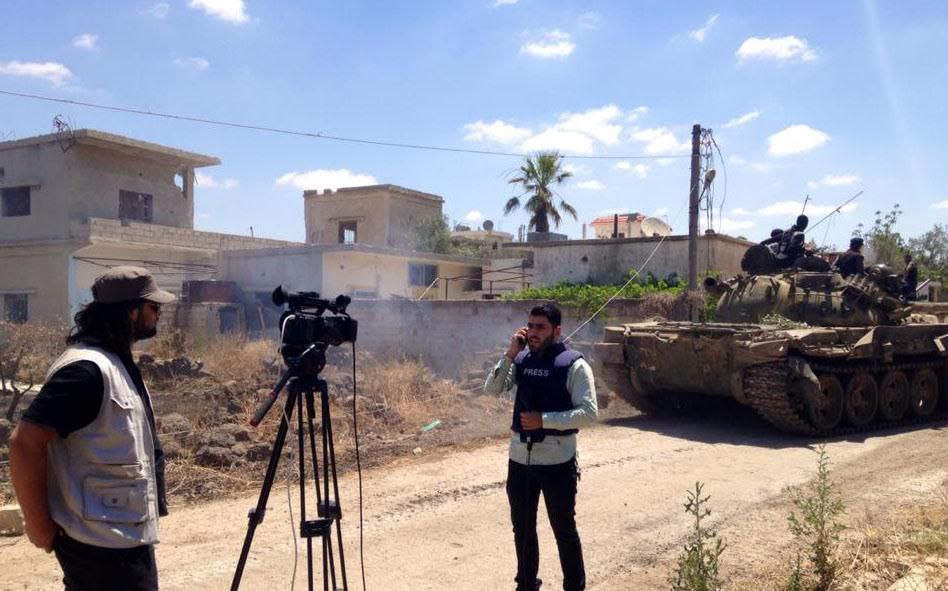 Syria’s Daraa governorate has entered a new era after a new settlement was reached between a Russian delegation and the security committee, the negotiating committees, and dignitaries of the city of Daraa al-Balad. The settlement, when implemented, will cover issues of persons wanted by security forces, the surrender of weapons by multiple individuals, and the re-establishment of three checkpoints inside the city, as stipulated by the agreement’s terms. But some are speculating that Iran is trying to fill the void Russia left in Daraa after the signature of the agreement to expand its influence.

In fact, on Tuesday, regime forces reopened the al-Saraya checkpoint, while the 4th Division (led by Maher al-Assad) and the al-Nimr militia sent military reinforcements to the “municipal stadium,” located in the center of the Daraa governorate. The reinforcements comprised hundreds of soldiers, as well as dozens of tanks, cannons, and heavy vehicles. These men and weapons are stationed in the al-Dahiya neighborhood, at the entrance to the center of the western Daraa governorate.

These violations coincided with the start of raids and searches by 4th Division militias on the south and east of Daraa. In response, young men from the area opened fire in the air, warning regime forces not to come any closer to civilian homes. In the early hours of the clashes, two young men were injured, while dozens of families were displaced from the Daraa al-Balad and al-Sadd neighborhoods.

Following these developments, the Central Committee of Daraa called for an immediate meeting with regime forces officers on Tuesday evening. At the meeting, the two parties discussed the escalation witnessed in the city. The meeting concluded that the committee would reject the regime officers’ demand that the Daraa al-Balad community hand over wanted members or deport them to northern Syria. The committee also refused to accept the re-opening of checkpoints and security positions controlled by regime forces in Daraa al-Balad, the camp for displaced persons, and the Tariq al-Sadd neighborhood.

On Wednesday, regime forces expanded their violations against the city of Daraa. 4th Division militias, which were stationed at the al-Kaziya roundabout in the al-Manshiyeh neighborhood, targeted the only medical center in the community with sniper fire. The attack forced medical staff to close the center to ensure the safety of patients and doctors. Violent clashes also took place on the outskirts of the Daraa camp, fought between regime forces and local youths. Young people defending the community were able to target a military vehicle belonging to regime forces near Basra Square. Regime forces targeted the community with heavy machine guns, while most of the camp’s streets came under sniper fire.

A Baladi News correspondent based in the city of Daraa reported speculation that militias close to Iran and the 4th division had deliberately thwarted the agreement to reach the Jordanian border, which is currently a kilometer away, taking advantage of the void left by Russia. The speculation follows that it was the 4th Division militias that violated the agreement and insisted on entering the area. These reports stressed that the Russians had not been involved during the last meeting, nor had they participated in the militia’s incursion into the city.

Concerns about the fate of journalists

The Association of Syrian Journalists issued a statement calling for the protection of journalists inside the southern Syrian city of Daraa.

About 11 journalists, media activists, and media service providers are at risk and targeted, now that Syrian regime forces and armed groups of renegade militias are entering villages and cities. Regime and militia forces are present in their largest numbers since they took control of the region in 2018, the association said in a statement.

On Tuesday (July 27th), the clans of Daraa issued a statement calling for the evacuation of families inside the city to safe areas, while rejecting war with regime forces.

“We, the people of Daraa, old and young, have been and continue to be advocates of peace. We do not want war at all. So, in the past few days, we have reached an agreement with the Syrian regime to inject blood, secure people’s safety, and preserve their dignity,” the video statement said.

“On Tuesday morning, we were surprised that the agreement’s terms had been broken. The regime was surprised by a large-scale incursion into the Daraa al-Balad area, during which two civilian martyrs were killed and several were wounded,” the statement said.