After a U.N draft resolution called for two border crossings for aid to flow into Syria, a new one calls for just one, according to al-Araby al-Jadeed. 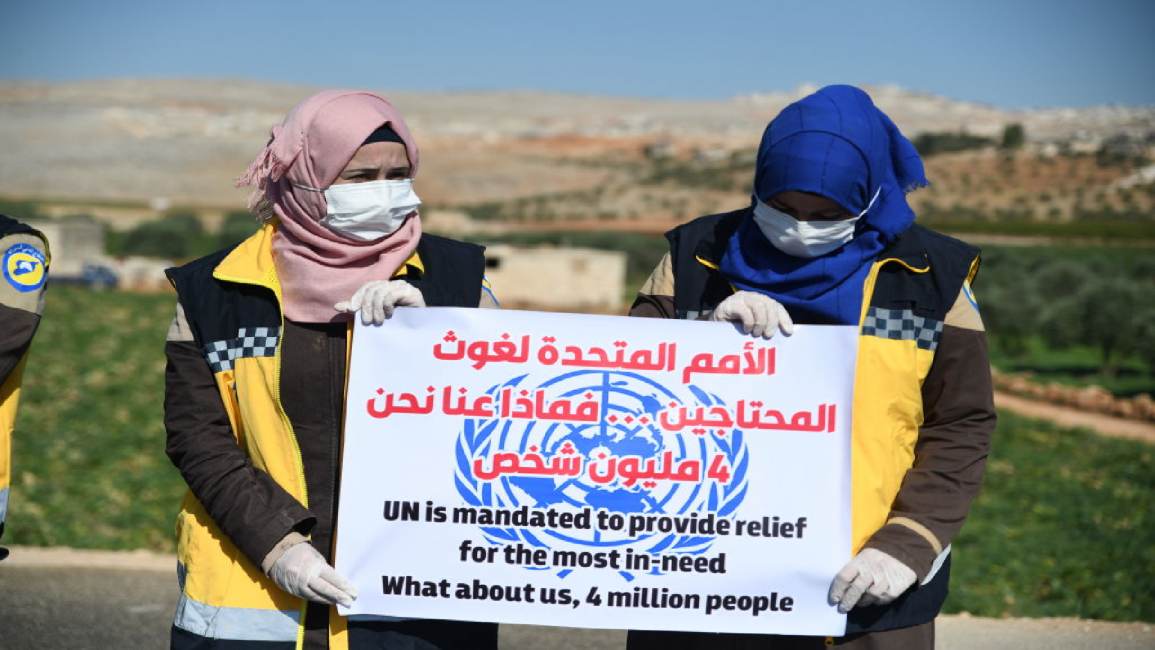 The UN proposed that only one border crossing remains operational from Turkey to deliver humanitarian aid to Syrians in the rebel-held northwest.

A U.N. resolution proposed late Wednesday would allow the delivery of humanitarian aid to rebel-held northwest Syria through just one crossing point from Turkey for a year after objections to an initial Security Council draft that would have authorized sending aid through two border crossings.

Last week, Russian Ambassador Vassily Nebenzia said the original proposal by Ireland and Norway to reopen the al-Yaroubiya crossing from Iraq to mainly Kurdish-controlled northeast Syria was “a non-starter.” Russia skipped consultations Tuesday on that draft and diplomats said China officially objected to the text with two crossings earlier Wednesday.

The Security Council approved four border crossings when aid deliveries began in 2014, three years after the start of the Syrian conflict. But in January 2020, Russia, which is Syria’s closest ally, used its veto threat in the council first to limit aid deliveries to two border crossings in the northwest, and then last July to cut the number to just one crossing at Bab al-Hawa from Turkey to northwest Idleb.

Diplomats said the new draft resolution would keep the Bab al-Hawa crossing open for another year, which the U.N., U.S., many Western countries, and humanitarian organizations say is critical.

Acting U.N. humanitarian chief Ramesh Rajasingham told the Security Council in late June that the failure to extend the mandate for Bab al-Hawa “would disrupt lifesaving aid to 3.4 million people in need across the northwest, millions of whom are among the most vulnerable in Syria.”

The 15 council members have until Thursday morning to object to the new draft, council diplomats said, speaking on condition of anonymity because consultations have been private. The U.N. mandate for using the Bab al-Hawa crossing ends Saturday, and the council is expected to vote on a cross-border resolution Friday, they said.

Two weeks ago, Nebenzia told the Security Council that aid moving across conflict lines within Syria “is the only legitimate option for a humanitarian operation to deliver assistance.” He accused Western nations of wasting the past year that could have been used “to find a seamless and constructive solution and an optimal balance of Idleb’s procurement through both Bab al-Hawa and domestic channels.”

Nebenzia also said U.S. and European Union sanctions put “a heavy burden” on every Syrian, saying: “You blow the whistle regarding humanitarian access while pretending that the problem of Syria’s suffocation with sanctions does not exist.”

China said Tuesday it wants the Security Council to not only extend humanitarian aid deliveries to Syria from neighboring countries but to tackle the impact of Western sanctions and the need to expand deliveries across conflict lines, difficult requests with just a few days left before the mandate for Bab al-Hawa ends.

Chinese ambassador Zhang Jun told reporters after closed council discussions Tuesday that he hopes “with more diplomatic efforts we can find a solution,” not just on cross-border aid.

“For China, definitely we want to see a solution concerning unilateral sanctions, concerning cross-lines, concerning the transparency of the cross-border. Not just talking about cross-border but about the general situation in Syria,” Zhang said.

In early July 2020, China and Russia vetoed a U.N. resolution that would have maintained two border crossing points from Turkey to the northwest. Days later, under pressure from both countries, the council authorized the delivery of aid only through Bab al-Hawa.

U.S. Ambassador Linda Thomas-Greenfield warned after Tuesday’s council meeting that Bab al-Hawa “is a lifeline to millions of people” in Idleb and if the crossing is closed, “I think the repercussions are obvious: people will starve to death.”

The U.S. initially called for three border crossings into Syria, but Thomas-Greenfield told reporters: “We cannot accept less than what we have today, and that’s one border crossing for 12 months that’s providing support for millions of Syrians.”

Whether Russia and China accept keeping Baba al-Hawa open for another year remains to be seen.

French Ambassador Nicolas De Riviere, the current council president, has warned that if humanitarian aid deliveries are allowed only across conflict lines, and not from neighboring countries, Western nations that provide 92% of humanitarian relief will stop the funding.