In Daraa al-Balad, after a truce agreement was reached, some people have returned to destroyed houses or scorched earth, Asharq al-Awsat writes. 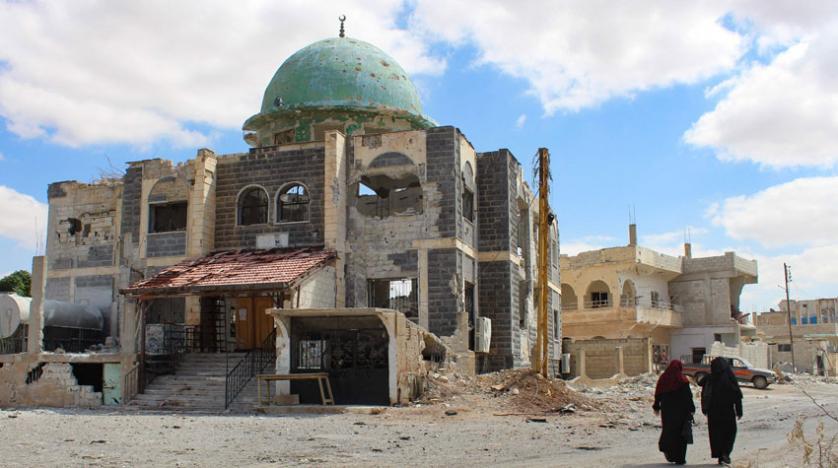 Some people have returned to Daraa to find destroyed houses or scorched earth. Others returned to homes that have been stripped bare of their belongings.

This is the situation in Daraa al-Balad after a Russian-sponsored agreement led to a de-escalation of tensions between the regime and the remaining opposition in southern Syria.

Despite the losses, the people have rejoiced at a major accomplishment, which is staying in their city and avoiding displacement. They have gone about removing the rubble and resuming their daily lives amid the destruction and the lingering smell of gunpowder in the air.

“The heavy shelling did not spare a thing,” “Abou Jihad” told Asharq Al-Awsat. “Look around you, houses have been leveled to the ground and entire areas are unrecognizable.”

“Yesterday, we were displaced, fighters and negotiators, today, we are builders. We have started to clean the city and houses that have been destroyed,” he continued.

“We will restore the beauty of the city and rebuild the Omari mosque and what it stands for. We regret what happened. We are a peace-loving people, who want to lead a dignified life away from the grip of the security forces or military,” he stressed.

“We have paid dearly for this in Daraa. Reality has been imposed on us. We don’t know what the coming days have in store for the city given the establishment of nine military posts around the area,” he stated.

A member of the central committee in Daraa told Asharq Al-Awsat that the locals managed to cling on to their lands. They have thwarted the plot to introduce demographic change in the area.

Their sons persevered against the forces of the Fourth and Sixth Divisions, as well as the Iranian militias, amid constant shelling and daily attempts to capture neighborhoods that were besieged for 73 days, he noted.

The withdrawal of Iranian militias from Daraa al-Balad on Thursday morning after a 78-day siege is the people’s greatest accomplishment, he declared.

“The negotiations carried out and decisions reached in Daraa were locally-made and not affiliated with any agenda, country, or opposition,” he stressed

“The people of Daraa are no warmongers, but the conflict and siege were imposed on them,” he went on to say.

“They have managed to thwart all plots that were aimed at dragging them towards escalation and war,” he added, saying 35 people paid with their lives in defending their homes.

Activist Raafat Abazeid told Asharq Al-Awsat that Daraa al-Balad is like a “ghost town” of rubble and destruction. “The stench of death is everywhere.”

“The people, however, have shown determination the moment they returned to their city. They rejoiced at remaining on their land and that is priceless,” he stressed.

The moment they returned, they went about cleaning the Omari mosque. They then cleared out houses and have tried their best to make them livable. Some have lost their homes and are staying with their neighbors. Others erected tents over the rubble of their homes. “This shows their attachment to their land despite the destruction,” he added.

A resident, “Abou Mohammed”, said life essentials such as water and electricity are non-existent in Daraa al-Balad.

The locals have resorted to transporting drinking water from irrigation wells to large tanks ahead of distributing them to houses at their own expense.

“As for electricity, it is already non-existent in Syria, so what can be expected in Daraa al-Balad, which for years has been punished by the regime?” continued “Abou Mohammed. At best, Daraa al-Balad used to receive no more than an hour or two of power per day.

Now, it has no power and the people have resorted to private generators. Fuel for the generators is bought at hefty prices on the black market. Others have turned to solar power, he revealed.