A meeting is scheduled between President Putin and King Abdullah II to discuss the recent developments in Daraa, according to Baladi News. 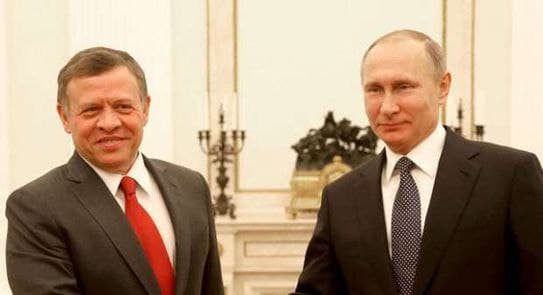 The Kremlin statement said that the meeting comes after Amman closed its entire border with Syria on July 31st due to the security situation in Daraa.

The statement described the meeting as crucial due to the developments taking place in the region and the world. These developments require concerted efforts to prevent their aggravation.

“The upcoming meeting between King Abdullah and Putin will resolve a lot of issues, especially in terms of the Syrian crisis and development in the Daraa governorate. Jordan is interested in reaching a peaceful solution that will put an end to what is happening in Daraa,” according to Mohamed al-Momani who is a member of the Foreign Affairs Committee of the Jordanian Senate.

“This issue is likely to be discussed between the King and Putin. Russia is closely linked to the Syrian regime and can play a prominent role in this issue,” the diplomat told Anadolu Agency.

Momani did not rule out other issues, including Iran and Afghanistan. However, he said that the meeting was likely to halt developments in Syria’s Daraa governorate. He added that understandings would be reached with Moscow to ensure that the kingdom’s stability was not affected.

Jordan is one of the countries in the world most affected by the situation in Syria. In Hopes of revitalizing economic and commercial trade movements, Jordan was ready to reopen its border crossing with Syria, Jaber-Nasi. On July 31, it was then decided to completely close the border crossing due to developments in the security situation on the Syrian side.

“Prime Minister Bennett will meet this week with President Biden in Washington, to talk about the situation in Gaza, Syria, and Lebanon. The meeting aims to strengthen relations between the two countries. However,  the main issue to be discussed will be Iran’s actions and plans to oppose them,” Israeli Ministry of Foreign Affairs spokesman Ofir Gendelman tweeted.