Syrian trucks are now allowed to transit into Arab gulf countries through Jordan without the need to switch into Jordanian vehicles, according to Athr Press. 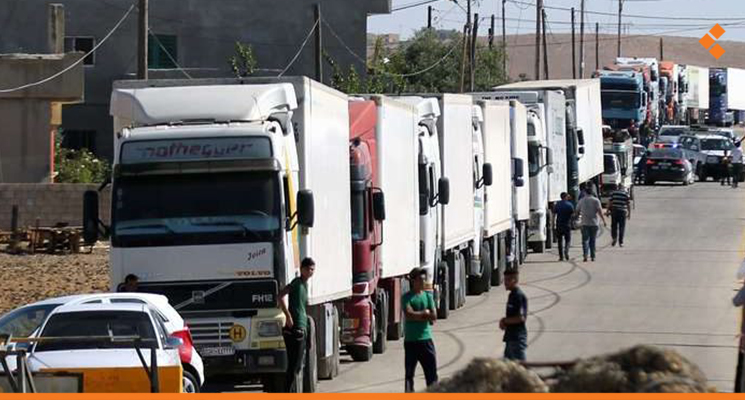 As of today, Syrian trucks and refrigerated vehicles are heading towards the Gulf through Jordan. The Syrian trucks have been allowed to enter Jordanian territory and transit directly to the Gulf states, without needing to switch cargo into vehicles from Jordan. This arrangement had previously allowed transportation of cargo to those countries, which did not allow Syrian vehicles to do so.

According to an Interior Ministry source during his interview with the local newspaper Al-Watan, Syrian trucks and private vehicles will also be allowed to enter Jordanian territory to facilitate the movement of passengers between the two countries. Conversely, Jordanian cars will be allowed to enter Syrian territory without swapping. This means that Syrian passengers will not have to disembark and change vehicles before entering Jordanian territory, and vice versa.

Concerning Coronavirus health procedures, the source indicated that nothing had changed about their application. He explained that travelers must still take a PCR test or present a Corona vaccine certificate.

The development comes after a telephone conversation on Tuesday between Syrian Interior Minister Mohammed al-Rahmoun and his Jordanian counterpart, Mazen al-Farriyah. During the call, the Syrian and Jordanian officials agreed to facilitate the transit of trucks cargo vehicles, and passenger buses between Syria and Jordan.

Read Also: King of Jordan: Assad Remains, and We Must Consider Dialogue

Abed Fadliyah, chairman of the Securities and Exchange Commission, said the agreement represents more than opening a border between two countries and allowing trucks to pass between them. Rather, the development signals the start of cooperation and trade exchange between Syria and Jordan. Fadliyah explained that this is a step not only between Syria and Jordan, but beyond Jordan. He expects that there will be other developments concerning other countries. For these reasons, the agreement is remarkable and a step forward.

Fadliyah pointed out that the measures imposed in recent times did not suit either country. He indicated that, although the “Nassib-Jaber” crossing was opened two years ago, the procedures for transporting Syrian goods through Jordan had been complicated by Western pressure on Jordan. Specifically, the pressure compelled Jordan to comply with economic sanctions imposed on Syria.