Assad and the Chinese Foreign minister discussed means of improving relations, especially when it comes to the Belt and Road initiative, according to SANA. 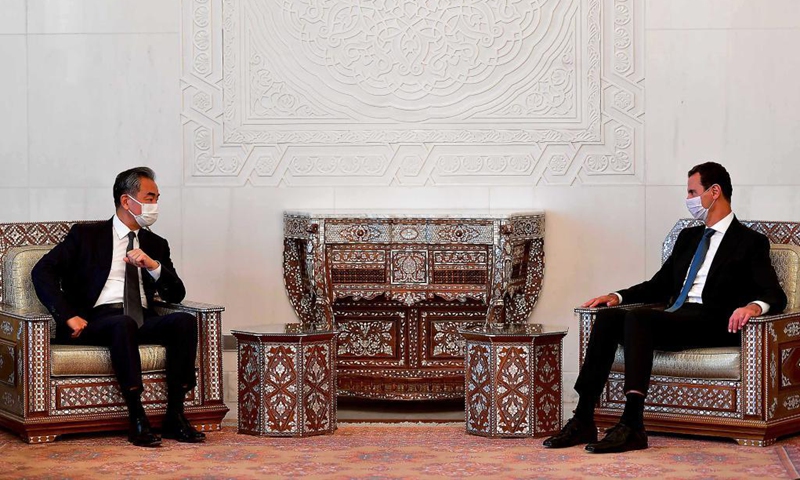 During the meeting, it was agreed to move towards a new stage in strengthening these relations and opening wider horizons for bilateral cooperation in all fields to serve the interests of the two countries and peoples.

Assad affirmed that China is a strong country and has a significant position in the international arena, adding that Syria looks forward to expanding areas of cooperation with it in all domains, based on its strong presence and its ethical policies which serve most countries and peoples of the world.

President Assad thanked China for its support to the Syrian people in various fields, and its important stances at the international forums in support of Syria’s sovereignty, territorial integrity, and independent decision.

Read Also: Syria Gets Donation of 150,000 Coronavirus Shots From China

The Minister underlined that his country will continue in supporting the Syrian people in the war against terrorism, confrontation of the blockade and inhuman sanctions imposed on them, as wells as standing against the interference in the domestic affairs of the Syrian people and whatever affects the sovereignty and territorial integrity of Syria.

Foreign Minister, Faisal Mekdad, also met with the Chinese Foreign Minister, Wang Yi, and the accompanying delegation in political-economic talks, during which they discussed topics of common interest between the two countries.

Wang affirmed commitment to Syria’s sovereignty and territorial integrity, indicating that the upcoming stage will witness boosting cooperation between Syria and China, which will deepen the two countries’ ability to confront the existing challenges.