ISIS is everywhere, but very little is known about it 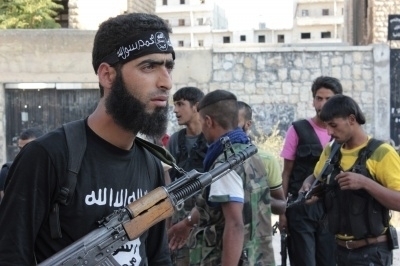 Syrian reality today is coming to terms with the Islamic State of Iraq and al-Sham (ISIS). The group’s arrival on the scene warrants further attention on several political levels, including the domestic, regional, and international. However, what might be the most important dimension is the result that the group’s activities have had on the people in the “liberated areas” of the where the group operates, especially in the northern regions where people had already suffered under the Assad regime. ISIS is a totalitarian, authoritarian, destructive religious project that aims to build an entity of rigid religious rules that conflict with the aim of many more Syrians who are anxious for freedom and dignity.

The Islamic State of Iraq and al-Sham didn't come out of nowhere. It was born out of many complicated events that triggered conversations and noise for a long time. The noise disappeared, but out of those discussions came the new born baby, “ISIS.” The caring womb of ISIS is "Jabhat Al-Nusra," an organization that was shrouded in mystery in Syria during the first few months of 2012. Jabhat al-Nusra was able to quickly establish important dominance on the Syrian map, offering its soldiers whatever they needed to excel while making them loyal to its ideology. This gave the organization credibility after many in Syria’s opposition initially thought when the group first appeared that it could be some sort of organization collaborating with Assad’s security forces to distort the credibility of the revolution by associating it with al-Qaeda. This debate, however, disappeared as the fighters who fought under Jabhat Al-Nusra didn't have to steal in order to get funding for their weapons and supplies as some other groups in the Free Syrian Army had to do. Such stories explain why the majority of Syria’s opposition rejected the US decision to designate "Jabhat Al-Nusra" as a terrorist organization at the end of 2012.

Jabhat Al-Nusra became known for its highly ambiguous politics mixed with its powerful military capabilities, as well as its well-crafted media strategies that focused on its front line operations against Assad’s forces. Doubts about whether of not Jabhat Al-Nusra was a part of al-Qaeda’s organization wasn't the focus of much attention, and Jabhat al-Nusra avoided getting too deep into such debates. But this question left many in the Syrian opposition in a difficult position, knowing that at this point in the revolution using the organized military strength of Al-Nusra against Assad was better than doubting the group. Others in the opposition believe that there is no time or capability to enter into a new war against Jabhat Al-Nusra anyway—even if the group was confirmed to be a branch of Al-Qaeda or was working with Assad's security forces.

While there was always the question about the turn from a peaceful to a militarized revolution, another debate for Syrians centered on where to stand in relation to Jabhat Al-Nusra, and what would be the best way of dealing with it. This was the main talk on the political table among Syria’s opposition and intellectuals. As with the first issue of the revolution’s militarization, many of the debates about Jabhat Al-Nusra were vexing, and the different sides involved focused more on trying to score points against one another than they really tried to find a real answer to the questions they faced.

After the cold war between the two sides and the back and forth with the voice recordings, ISIS gained the upper hand over Jabhat Al-Nusra in Syria. Many foreign fighters joined under the ISIS flag using their previous logistic experience in Iraq in Syria. All of that gave ISIS power over Jabhat Al-Nusra, especially after the group took over the oil resources in the northern cities of Deir ez-Zoor and Al-Hassakeh.

ISIS quickly revealed their true face, and their previously hidden desire to be the only power in the area and to control everything. They also revealed their aggression toward any kind of civil society as they forced communities to give up whatever they deemed to be “apostasy.” Furthermore, they are trying to force society into a corner of religious doctrine that fits ISIS standards. ISIS and all its related parties didn't do anything to hide their rapacity as they claimed everything, regardless of whether it was public or private, as spoils of war. This led to the spread of the concept that ISIS has the right to own any properties under any condition that it sees fit. Many times they use only very vague excuses. For example, ISIS would seize a house or a car if the owner was not Muslim, or if the owner was not conservative enough, and claim that the original owner of the house was employed by the Syrian regime. And sometimes they don't even bother to give any excuses. In the northern town of Raqqa, for instance, even school desks weren’t kept out of their hands. And kidnapping became ISIS's way to deal with young activists.

The general public opinion regarding ISIS includes a conspiracy theory about the group, especially in the liberated areas. The conspiracy theory states that ISIS is nothing but another segment of the regime’s security forces. This theory, however, comes from the acknowledgment of the experience that the security forces gained with the Islamic Jihadist and their organizations in both Iraq and Lebanon. As proof of the theory, people mention the number of shabeeha (regime thugs) who suddenly became "jihadist" overnight. Other proof often cited is the milder strategies ISIS uses against the Syrian regime in comparison to their aggressive efforts fighting against the FSA and other groups on the side of the revolution, even other Islamic battalions.

In Raqqa, many angrily point to the story of the "Palace of Province." The story of the palace and ISIS is known across the city. The "Palace of Province" is very huge, sumptuous, and even provocative to some extent when considered alongside the poverty of the city. The palace was used by the Syrian government when it was still in control of the city, but today ISIS has control of the palace. However, ironically enough, the palace, unlike the rest of the city, was never shelled by the regime’s regular bombardment. On the other hand, some of the area’s activists claim that ISIS has a relationship with interests associated with the Assad regime, or with the regime itself, in order to establish oil trade bushiness within Syria. Another related story is the fact that ISIS never took over any of the houses, cars, or properties of any of the former or current officials in the area, though it does so regularly with any other house or car without prior explanation or reason given after the fact. This comes from either direct or indirect family relations that the ISIS leader has with those officials.

Violations against civil activists in the liberated parts of Syria has become daily news associated with ISIS, as well its daily attacks targeting different military forces fighting against Assad like the Free Syrian Army or even other more Islamic-oriented groups. This occurs alongside a deep feeling of helplessness and great political emptiness. Today, time runs backwards and activists have to hide even in the "liberated areas." In some cases, activists have been forced to leave Syria because ISIS is wildly unforgiving to anything different from their own inflexible, stubborn point of view. The horizon looks dark, as dark as their masks that ISIS never takes off.

Yasseen Swehat  contributed to this report