The Syrian ambassador to Jordan has a history in intelligence operations 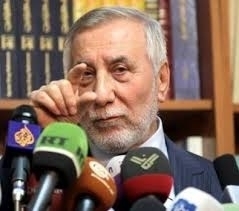 General Bahjat Suleiman, the Syrian Ambassador to Jordan, was expected to return to Damascus after the outbreak of the Syrian revolution at the beginning of 2011, in order to maintain his position among the group of officers who were called up hastily to manage the crisis.

However, this did not happen. His post, which he has held since 2009, turned out to be a highly sensitive position due to the extensive opposition activities in Jordan and the flow of Syrian refugees into the country.

The effect was to change the Syrian embassy in Amman from a diplomatic post to an intelligence cell, led by Suleiman, whose career has been marked by infamous nasty and dirty operations.

Suleiman is one of the most powerful Alawite officers in Syria. A previous manager of the internal security in Syria, he had previously held many high ranking security posts.

He gained a mysterious PhD in Romania, and was a vocal supporter of Rifaat Assad, President Bashar Assad’s uncle, who tried to overthrow his brother and Bashar’s father, the former President Hafez Assad when he was a major. Later, he supported Hafez Assad.

Suleiman played a very important role in the Bashar Assad 's succession to the presidency in 2000. He was considered one of the theorists behind his reformist trend, writing, for this purpose, a series of articles in several Arab newspapers under a pseudonym, in support of the plan.

This, however, did not spare him from an ongoing conflict with the strong son-in- law of the president, Asef Shawkat, leading to his sidelining in 2005 to a marginal post.

He is one of the men wanted in connection to the assassination of Rafiq al-Hariri, the Lebanese Prime Minister.

Suleiman owns a number of companies and has wide commercial activities in Syria operating under the Aluge Group, registered under the names of his relatives.

His son, Majd owns a media empire and a series of restaurants, making him one of the most prominent businessmen in Syria.

Just two months after the beginning of the Syrian Revolution in March 2011, Suleiman orchestrated a gala dinner and invited a number of Jordanian journalists who were considered to be nationalists, or as paid supporters, to promote the Assad regime. He justified the regime’s criminal response to the uprising and attempted to polish his image. He also would also later visit councils and social events for the same purpose.

More recently, Suleiman has managed a massive smear campaign against the people of the Zaatari refugee camp in Jordan, accusing them of exploiting refugees by forcing them into prostitution, in an attempt to end popular sympathy for their plight in Jordan.

On 19 August 2012, Suleiman was summoned by the Jordanian Ministry of Foreign affairs which protested against Syrian shells falling on the village Al-Turrah in northern Jordan. However, Suleiman refused to attend, pretending he was on vacation, and, in an irresponsible breach of normal diplomacy, sent a lower level embassy diplomat to receive the protest note in his place, causing massive popular and media indignation. His conduct reached the level of outrage and there were demands to expel him from Amman and close the Syrian embassy. The Jordanian government so far has not responded to these calls because of the sensitivity of the relationship with Syria and its relation to many other security files, according to the Jordanian Ministry of Foreign affairs.

Suleiman has an account on the Facebook under the name Khatirat Abou al-Majed, where he publishes his attitudes and his personal views about what is happening in Syria. It is full of name-calling and obscenities, especially towards the Gulf states, which he considers hostile to the al-Assad regime.

His son, Haidara, also has an account on Facebook on which he wrote, answered a question about his opinion on the explosive barrel bombs used on Aleppo: “The barrels are ours and the land is ours too. We have the right to throw it any place, any time. No one comes and sobs about the explosive barrels. And anyone who is not happy, let them go to hell.”