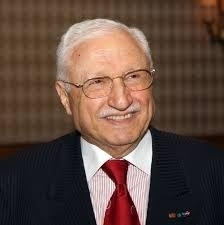 The son of the Damascene Shiite family had never hidden his desire to play a political role in his country and its future before the Syrian revolution suddenly stormed his dreams and the dreams of those who painted their lives and futures with the brush of Assad's regime—and who managed their interests according to its secrets.

Saeb Nahas, whose fortune exceeds half a billion dollars (according to many estimate), has deep commercial relations with Iraq, religious and political relations with Iran, and interests in many western, Latin American, and central Asian countries. Today, he tries to stay out of sight as much as possible. But despite his efforts, he attracted attention when the regime accused him (indirectly) of tax evasion.

Did Nahas want to jump from the sinking ship of the regime? No one can tell, since the regime's accusations through non-official media can be considered more a message than a punishment, especially since there are suspicions about his role in providing logistical support to Iran's activity in the Sit Zainab neighborhood in Damascus.

The connection between Saeb Nahas and the world of business goes back to his grandfather, Rida Nahas, who became well known among the bourgeoisie of Damascus in the beginning of last century. Rida’s son, Shafiq, followed the steps of his father and then passed the legacy to his seventeen-year-old Saeb in 1953.

Between Iraq and Germany, Saeb strengthened his economic group, which included hotels and pharmaceutical plants, by becoming one of the major importers to Iraq.

The Nahas Group includes various service and industrial sectors today and it has companies in Syria, Lebanon, the United Arab Emirates, Sudan, Jordan, and Iraq. The group is represented by more than 30 companies in Europe, the near east, Arab countries, and the United States.

The political ambition and the father's objection

Nahas showed a desire to practice politics in Syria for many decades, but his father warned him of changing the family’s historical track, which worked exclusively in industry and trade. Nahas admitted that his father was right, but his relations with the powerful figures of politics, security and the military, inside Syria and outside it, exceeded the necessary limit required to accomplish his commercial deals, and revealed his old ambition to add politics to his main activities.

Because of his divergent political and commercial relations, Nahas became the honorary consul of many countries in Syria, including Senegal, Mexico and Kazakhstan, but this is only the tip of the iceberg of his political activities.

Nahas was introduced to Hafez al-Assad in 1972, and Nahas gained stature from him. He carried out remarkable diplomatic missions—some were public and others were secret. The most remarkable missions were rebuilding relations with Iran and West Germany in the 1970s, but his prominent public mission was opening the channels of communication with France amidst the tension between Damascus and Paris after the death of Lebanese Prime Minister Rafiq al-Hariri in 2005. Nahas continued his mission until the relations between the two countries became stable during the presidential term of Nicolas Sarkozy who made Nahas a Knight of the Legion of Honour for his role in developing Franco-Syrian relations. Nahas also had a prominent secret role in reestablishing relations with Washington after the death of Hariri and the war of June 2006, a role leaked through documents issued by Wikileaks.

In October 2013, after the Syrian chemical weapons crisis, the Israeli newspaper Maariv published a report about Syrian biological weapons. It was noticeable that the Israeli newspaper spoke about Nahas as the man who stands behind most of the Syrian pharmaceutical investments that are the base for biological weapons industry in Syria. Maariv described Nahas as a Syrian businessman who has good commercial relations with Iraq and other countries, and who uses these relations to serve the Syrian intelligence. This reminds us of the plea raised by the former president of the Syrian National Council, George Sabra, to the American foreign ministry last year, when Sabra asked to include the activities of Nahas in the list of sanctions against Syria, as Sabra considered him one of the major supporters of Assad in producing chemical weapons.

A governmental institution loses to make him win

The above words proves that Saeb Nahas is still one of the main supporters of Assad, but the talk in regime media about his tax evasion and his trying to avoid paying a loan of 512 million Syrian pounds to the Commercial Bank of Syria and the Bank of Jordan leaves another impression. Other Syrian media channels said a year ago that Nahas was leaving Syria, that he had closed his restaurants and tourism companies in Damascus, and that he declared bankruptcy to avoid paying compensation to his employees. A year ago, Nahas sold his shares in the Mashta al-Hilu Resort, but the price was high if we take into consideration the situation of the tourism market in Syria. The value of his share was valued at 750 million Syrian pounds, but the picture becomes clear when we know that the (state-owned) Social Security Organization paid this large amount of money to buy his share. The deal was criticized even by pro-regime media channels.

Such information reveals that Nahas was supported by Assad and his regime a year ago. What has changed today? Was the last message a financial blackmail against a man who used his relations with the regime to gain large amounts of money in a country where relations rule? It is hard to answer this question now, especially that Nahas keeps a distance between himself, the regime, and Iran. In this context, some informed sources say that the golden age for Nahas was during the term of Hafez Assad. When Bashar came to power, he attached him to Rami Makhlouf, and that is the reason why he appointed his son, Muhammad, to deal with Rami. While Nahas’ interest was in building factories, providing electronic devices and cars, he began working in tourism and became one of regime's financial supporters—even a partner with the Assad family.

The past days’ ill reveals the secrets of the inter-relations between the Syrian financial world and Assad's regime, including the relations between Nahas and the Assad family and relatives. Thus, the Syrians’ revolution proves day after day that it exposed many secrets in the world of businessmen, where people work secretly more than they reveal in public.