The Opposition president met with the EU chargé d'affaires, with whom he discussed the refugee crisis and political transition in Syria, according to the SOC Media Department. 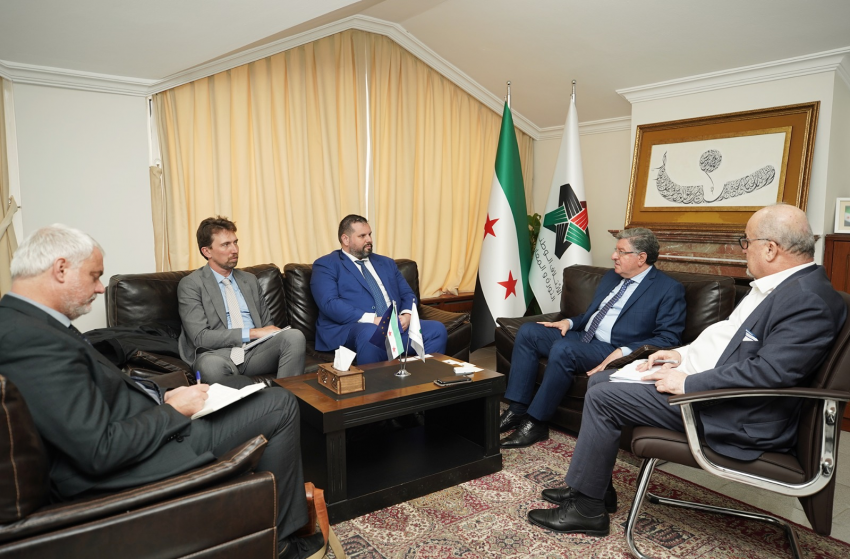 President of the Syrian Opposition Coalition (SOC) Salem al-Meslet, received the EU chargé d’affaires to Syria, Dan Stoenescu, and discussed with him the latest field and political developments in Syria.

Meslet called on the EU to reject the forcible return of any Syrian refugee to Syria in view of the serious threats the Assad regime poses to returnees.

With regard to the political process, Meslet indicated that the latest session of the Constitutional Committee ended without achieving any results due to the Assad regime’s intransigence and procrastination as well as its rejection of any serious steps in the path of a political solution.

He emphasized that Russia is trying to legitimize and rehabilitate the Assad regime as well as participates in the destruction of Syria and forces more Syrians to flee the country. He stressed that Russia’s actions are further exacerbating the suffering of the Syrian people and turns more of them into IDPs and refugees looking for a safe haven in all parts of the world.

The Opposition president stressed the need for the EU intervention to find a swift solution to the plight of Syrian refugee stranded on the Belarusian-Polish border amid severe weather conditions. He added that additional punitive measures must be taken against the Assad regime and Russia who always seek to create similar crises with the aim of putting pressure on Europe and the international community by exploiting the refugee crisis.

For his part, Stoenescu reaffirmed the EU’s commitment to supporting the cause of the Syrian people, adding that the EU hopes to see a free, democratic and prosperous Syria.

Stoenescu also stressed that the EU still supports a transparent political process, adding that returning refugees to Syria is a red line and totally unacceptable as the security situation in Syria has not changed a bit.