The refugee crisis amplifies at EU-Belarus borders, Opposition warns against normalization with the regime, and the chief spy of Syria in Cairo. Catch up on everything that happened over the weekend. 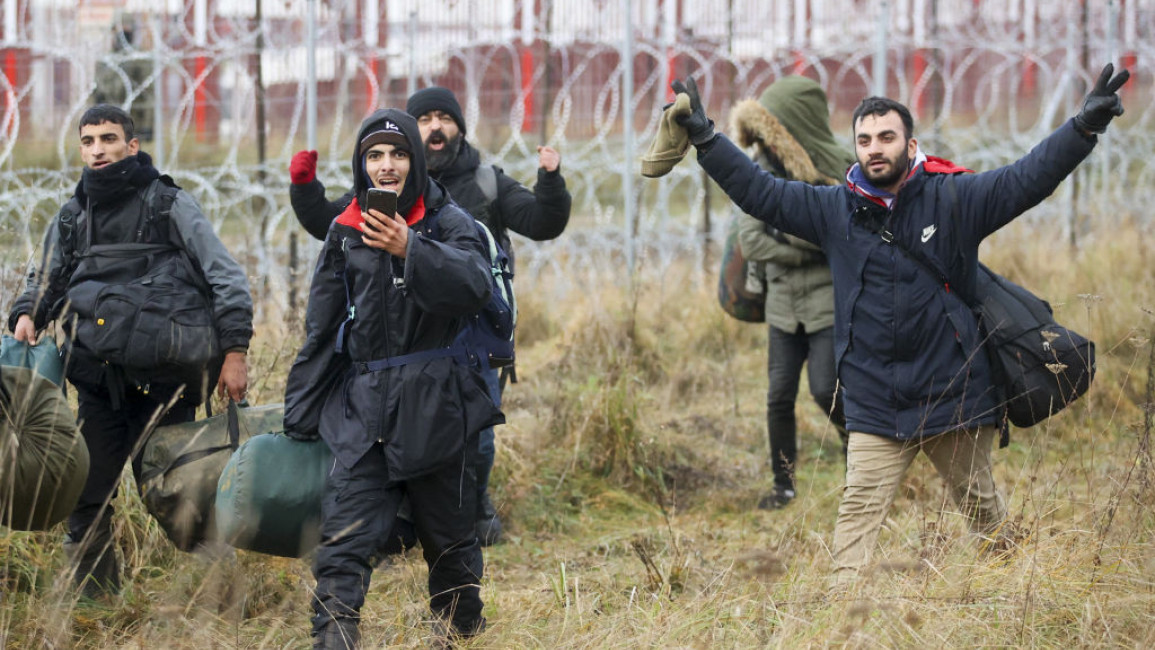 Polish police said Saturday that the body of a young man from Syria was found in the woods near the border with Belarus, the latest victim in a political standoff at the European Union’s eastern border, al-Araby al-Jadeed reported. The regime in Minsk has for months been encouraging illegal migration across the border into the EU nations of Poland, Lithuania and Latvia. All three countries are reinforcing their borders, seeking to block the newly opened migration route, and the situation is growing more dangerous as winter approaches. Police said the body was found a day earlier near the village of Wólka Terechowska. They said the exact cause of death could not be determined. It brings the death toll now to at least nine reported victims in the migration encouraged by Belarus’ longtime President Alexander Lukashenko.

The President of the Syrian Opposition Coalition (SOC), Salem al-Meslet, received the French ambassador, Herve Magro, at the SOC’s headquarters in Istanbul on Wednesday. In attendance were also SOC’s Vice-president Ruba Habboush and Secretary-General Haitham Rahma. SOC’s Media Department reported that the two sides discussed the latest political and field developments and the course of the political process. Magro reaffirmed his country’s continued support for the cause of the Syrian people and meeting their legitimate aspirations for freedom and dignity. He stressed that a political solution can only be reached through the implementation of UN Security Council resolutions, especially Resolution 2254. He also stressed the need to put forward practical proposals to revitalize the political process in Syria. Mr. Magro indicated that the current strategy of the French government rests on three main pillars: maintaining the EU’s firm position with regard to the issue of reconstruction, persuading the United States to establish mechanisms for implementing UN resolutions, and sending messages to Arab states warning against restoring relations and normalization with the Assad regime.

In a statement issued Thursday by the Syrian National Coalition (SOC), the group said that it opposed “any re-engagement with the Assad regime”. SOC warned of the “dangers of extending a helping hand to a criminal regime that has proven that it can ally only with murderers and criminals. Promoting the restoration of relations with the Assad regime represents a grave strategic mistake and a move towards a dead end… No one will be able to grant legitimacy to a gangster regime that is responsible for killing, displacing and detaining millions, and that committed massacres using chemical weapons and barrel bombs,” the statement said. It added that normalization of relations between Arab states and the Assad regime “will only serve the Iranian project, which has become a nightmare for everyone in the region”.

The Director of the Syrian General Intelligence participated in the Arab Intelligence Forum in Cairo last week despite being on the U.S. sanctions list since September 2020 due to the Caesar Act. According to Zaman al-Wasl, Husam Muhammad Louka appeared in the forum through a photo that collected a large number of Arab intelligence chiefs. On September 30th, 2020, the Treasury Department took action against Louka, the Syrian General Intelligence Directorate. Louka is a longtime leader within the Syrian regime’s security apparatus. In 2010, Louka was appointed Assistant Head of the GID. Since the Syrian revolution broke out in March 2011, Louka has held several high-ranking positions in both the Syrian Political Security Directorate and the GID, including as Head of the Political Security Branches in Homs and Hama. While working in Homs, Louka reportedly committed a number of massacres and was responsible for the torture of detainees in his department.

Foreign Minister of Russia ,Sergey Lavrov, called for lifting all obstacles that hinder humanitarian assistance delivery to the Syrian people and implementing the international resolutions that outlined the political solution to the crisis in Syria SANA reported. “There are many international resolutions issued by the Security Council that have to be implemented as main points of the settlement were set, in addition to the resolution adopted last summer that calls for broadening humanitarian assistance along with lifting any obstacles that hinders their delivery, including systems for the generation of electricity, water, health, building and reconstruction”, Lavrov said in a press conference on the sidelines of the meeting of Security Cooperation Council held in Paris.

Turkish-backed Syrian rebels on Saturday shot down a Russian reconnaissance drone in the northeastern Ras al-Ayn region at the fire line with the Kurdish-led forces. Rebel sources told Zaman al-Wasl that the Ahrar al-Sharqiya Division, key rebel faction in the National Army, shot down a Russian (Orlan-10) reconnaissance drone near the international M4 highway near Ain Issa town, north of Raqqa province.