Rifaat al-Assad back to Syria, an Israeli attack on pro-government positions kills two, and Interpol welcomes the regime back. Catch up on everything that happened over the weekend. 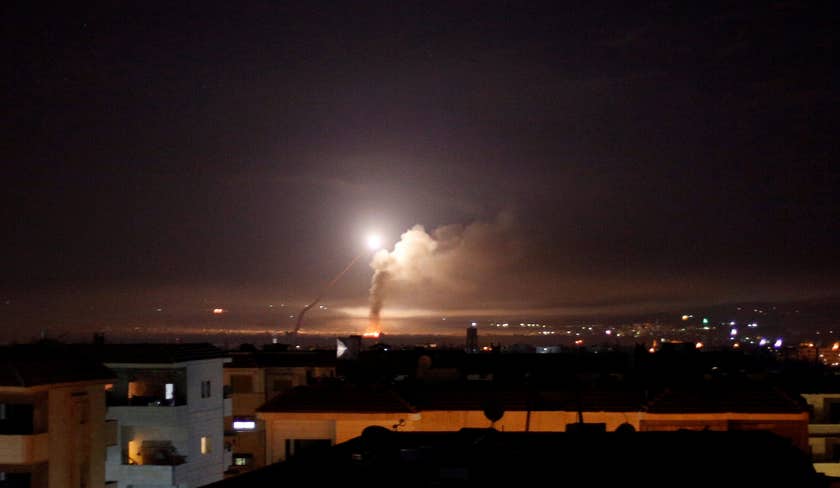 Bashar al-Assad has allowed his exiled uncle Rifaat to return to Syria, according to pro-government Al Watan. “Rifaat al-Assad arrived in Damascus yesterday, to prevent his imprisonment in France after a court ruling was issued and after the confiscation of his property and money in Spain as well…. He would play no political or social role.” Assad, according to Reuters, was handed a four-year jail sentence earlier this year that he was unlikely to serve because of his age but the ruling cleared the way for all his property in France to be seized. His properties in Spain were confiscated before that on the back of a money-laundering investigation as well. Rifaat al-Assad is widely held responsible for the suppression of an Islamist uprising in 1982 against then-president Hafez al-Assad, Bashar’s father. Many thousands were killed back then.

U.S. President Joe Biden said on Thursday the declaration of national emergency powers in dealing with Syria will continue for one year, AFP reported.  In a statement, the White House said that the emergency announced as a part of the International Emergency Economic Powers Act will go beyond its deadline, which is October 14th, 2021. “I transmit to the Congress a notice stating that the emergency is to continue in effect beyond the anniversary date,” Biden said. He also accused Turkey of undermining efforts to combat ISIS. “The situation in and about Syria, and in particular the actions by the Government of Turkey to conduct a military offensive into northeast Syria, undermines the campaign to defeat ISIS, endangers civilians, and further threatens to undermine the peace, security, and stability in the region, and continues to pose an unusual and extraordinary threat to the national security and foreign policy of the U.S.,” the president said.

An Israeli missile strike on an airbase in central Syria has killed two Damascus-allied foreign fighters and wounded several Syrian service personnel, the Syrian Observatory for Human Rights said. Two foreigners were killed in the raid on the T-4 airbase late Friday, but their nationality was not immediately clear. The official Syrian news agency SANA earlier said that “at around 9:00 p.m., the Israeli enemy… fired a volley of missiles towards the T-4 military airport… “The aggression wounded six soldiers and led to some material damage.” The attack targeted a drone depot at the base, according to the war monitor, a pro-Syrian opposition organization of uncertain funding based in the UK.

Interpol said it had reintegrated Syria back into its information exchange network, lifting restrictions imposed on President Bashar al-Assad’s regime in 2012, according to Al-Jazeera. “In line with the recommendation from the General Secretariat headquarters, Interpol’s executive committee endorsed that corrective measures applied to Syria be lifted,” an Interpol statement said. The statement emphasized that it was incorrect to state that Syria had been readmitted to Interpol as it has been a member country since first joining in 1953. But Syria does not have the power as a member state to issue international “Red Notice” arrest warrants, though it can, like any member state, request the general secretariat of Interpol to do so.

Reuters reported that Denmark said on Thursday three Danish women, who were evacuated from Syrian detention camps along with their 14 children, had been charged with aiding terrorist activities and illegally traveling to and residing in conflict zones. “Upon arrival in Denmark the mothers were arrested and preliminarily charged,” presiding police inspector Tenna Wilbert said. “Now an investigation and legal proceedings await.” Depending on the outcome of the investigation, prosecutors must decide whether to confirm formal charges, paving the way to a trial. The women faced questioning in front of a judge on Thursday, where prosecutors will argue they should be kept in custody.

The Health Ministry announced on Saturday that 260 new coronavirus cases were registered in Syria, adding that 70 patients recovered while 10 passed away, SANA reported. The total number of the reported coronavirus cases in regime-held Syria has reached up to 36,713, of which 24,435 have recovered; 2,332 have passed away.