The Egyptian Minister of Foreign Affairs, Sameh Shoukry met his Syrian counterpart, Faisal Mekdad, on Friday, on the sidelines of the UN General Assembly in New York, according to North Press. 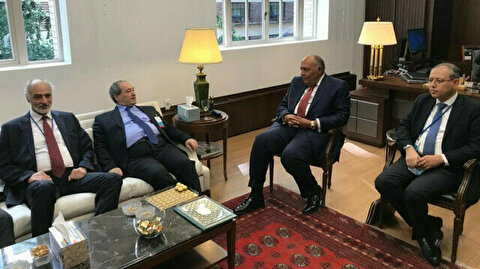 In a statement, the Egyptian Ministry of Foreign Affairs said that its Minister, Sameh Shoukry met his Syrian counterpart, Faisal Mekdad, on Friday, on the sidelines of the UN General Assembly meetings in New York.

The Egyptian Foreign Ministry stated that the two sides “discussed ways to end the Syrian crisis.”

The Syrian Ministry of Foreign Affairs and the Expatriates said in a statement that the meeting discussed developments related to the crisis in Syria and the importance of concerted efforts to solve it.

This meeting is the first of its kind since the Syrian government’s membership in the Arab League was suspended in 2011, while the Egyptian Minister is the fifth Arab minister to meet Mekdad in New York, after his counterparts from Mauritania, Jordan, Oman, and Iraq.

On Friday, the Iraqi President, Barham Salih, said, during his speech before the UN General Assembly that “the time has come for a serious move to end the suffering of the Syrians.”

Read Also: Talks Between Syria and the Emirates on Water and Energy Cooperation

In the context of international calls for putting an end to the Syrian crisis, the Jordanian Minister of Foreign Affairs, Ayman Safadi said on September 22nd, “The humanitarian disaster in Syria must end.”

Mekdad also met with the UNSG Antonio Guterres and expressed his satisfaction with the priorities that the latter set in his opening speech before the General Assembly, especially achieving just peace in the world, bridging the gap between the rich and poor countries, the equitable distribution of anti-Covid 19 vaccines, and confronting climate change.

Mekdad stressed the need to focus on economic projects and early recovery, referring to the negative repercussions of the unilateral coercive measures illegitimately imposed on the Syrian people.

Minister Mekdad and Ramtane Lamamra, Algerian Foreign Minister, also discussed the developments of the situation in both countries and in the Arab arena, and ways to enhance cooperation between them in various fields.

He also discussed with Khalifa Shaheen Almarar, Minister of State in the United Arab Emirates, ways to develop bilateral relations between the two countries to serve the interests of the two brotherly peoples.