Turkish media reported that a 'historic meeting' will be held between the heads of the secret services in Turkey and Syria, according to Baladi News. 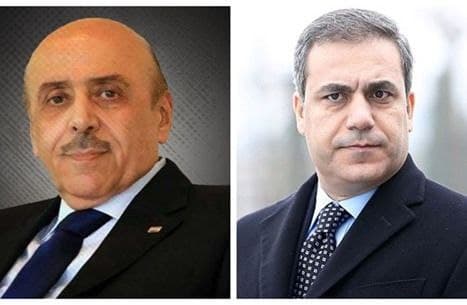 The newspaper Türkiye Gazetesi reported that a “historic meeting” will be held between the head of Turkish intelligence, Hakan Vidan, and the head of the Assad regime’s national security apparatus, Ali Mamlouk, in Baghdad.

“The meeting to be held in Baghdad is the beginning of a new operation,” said Ismail Haqqi Pekin, former head of Turkey’s military intelligence service, in a report.

Pekin stressed that this meeting will reinvigorate diplomatic and political channels between the two countries and allow for the beginning of a new era.

During the meeting in Baghdad, Fidan and Mamlouk will discuss the issues of the PKK, asylum, and the situation in Syrian areas linked with Turkey, particularly Idleb and Daraa. The meeting will also cover the development of a new roadmap.

Read Also: Will Erdogan and Assad Meet in Iraq?

Nozt Chishik, editor-in-chief of the Turkish newspaper Independent, told Türkiye Gazetesi that the AKP’s policy toward countries in the region, particularly Egypt, Syria, and Iraq, has changed.

“In the near future, we will see a meeting between intelligence chiefs in Turkey and Syria,” Chishik said.

In January 2020, Russian representatives met with Mamlouk and Fidan in Russia.

At the time, a tripartite meeting of Syria, Turkey, and Russia took place in Moscow comprising Mamlouk, Fidan, and several Russian officials.

The regime delegation called on Turkey to fulfill its obligations under the Sochi Agreement, which was signed between Turkish President Recep Tayyip Erdogan and Russian President Vladimir Putin in September 2018. The Sochi Agreement concerned Idleb and called for the removal of what the regime describes as “terrorists” from the de-escalation zone, as well as the opening of international roads.

Assad’s media advisor, Buthaina Shaaban, spoke at more than one media event about security meetings between the regime and Turkey. She claimed, however, that they offered nothing.