A high-profile Lebanese delegation in Damascus, an Israeli attack on Syria, and a call by activists to save Syria's Daraa. Catch up on everything that happened over the weekend. 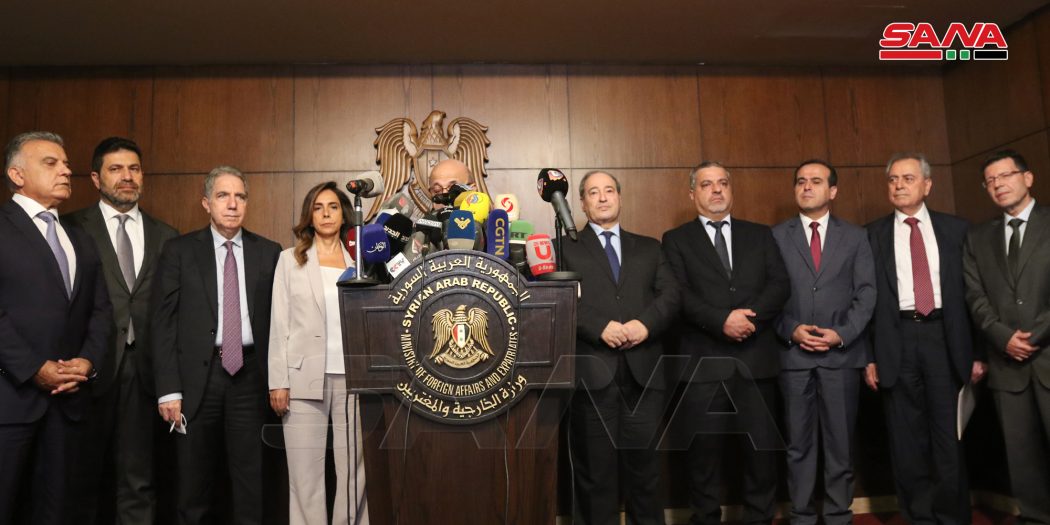 Syria said on Saturday that it welcomed Lebanon’s request to import Egyptian gas for energy generation via its territory after Lebanese ministers made the highest level visit to Damascus in years. According to Reuters, Lebanon is suffering energy shortages that have forced even essential services including hospitals to shut down or scale back operations. The crisis is the result of a wider financial meltdown that has devastated the economy since 2019. The delegation, led by Zeina Akkar, who holds several positions in Lebanon’s caretaker government including the foreign minister, aimed to pave the way for a U.S.-backed plan to ease the power shortages in Lebanon by transmitting electricity via the Syrian grid. The plan involves using Egyptian gas to generate electricity in Jordan that will then be transmitted via Syria to Lebanon.

The U.S. has expressed its concerns about the continuation of the bombing by Syrian government and Russian forces on Idleb and its surroundings in northwest Syria, where Turkish-backed Syrian armed factions assume control. “The U.S. is deeply concerned with the intensification in airstrikes and shelling in northern Syria in recent months, leading to dozens of civilian casualties and displacements,” the U.S. Embassy said on Twitter. “We call on all sides to respect the ceasefire, protect civilian populations, and work toward a political resolution to the conflict as outlined by UN resolution 2254.”

Daraa’s residents and activists in southern Syria called on the United Nations on Friday to help save the lives of more than 50,000 people under threat of being displaced from the town by Bashar al-Assad’s regime. The plea came after the Russian side – battling alongside Assad since 2015 – allegedly accepted the option of displacing the besieged neighborhoods of Daraa al-Balad, as the implementation of the latest truce provisions had reached a dead end. Official spokespeople in Daraa sent a message to international sides, including the UN, to call on Russia to preserve the 2018 agreement as a guarantor of the truce and prevent any attacks on civilians, which had been trapped in the town for over 70 days by regime forces. A spokesman for the negotiating Daraa Central Committee said that residents took the decision to leave the town to prevent “being murdered”, according to a report by al-Araby al-Jadeed.

Read Also: Has the Daraa Agreement Undermined the Expansion of Iran in Southern Syria?

Israel carried out airstrikes on targets near Damascus early on Friday, triggering Syrian air defenses but causing no casualties, the second such attack in just over two weeks, Syrian state media reported. The Israeli military declined to comment on the report, according to Reuters. A Syrian military source said Syrian air defenses shot down most of the Israeli missiles and only material damage was done in the attack launched at 1:26 a.m. Syrian TV showed footage of the air defenses being fired. The Israeli army said a surface-to-air missile launched from Syrian territory towards Israeli air space had exploded over the Mediterranean Sea and residents in central Israel had located several fragments of the projectile on the ground.

President Bashar al-Assad received on Saturday the Secretary-General of the Popular Front for the Liberation of Palestine- General Command -Talal Naji and his accompanying delegation, SANA reported.  Talks during the meeting dealt with the latest developments on the Syrian and Palestinian arenas and the related Arab and regional issues. Naji hailed the firm stances of the Syrian Arab Republic towards the Palestinian cause under the leadership of President Assad, his wisdom and courage as an exceptional and historic Arab leader, thanking the Syrian Arab people and army for their sacrifices despite all the difficult and hard circumstances and pressures.

Six Syrian refugees detained in Lebanon last week face deportation to war-torn Syria, Amnesty International reported. The six men were arrested outside the Syrian embassy in Beirut as they collected their passports, accused of entering Lebanon irregularly. They are now being held by the Lebanese General Security Directorate and risk being deported back to Syria imminently. “Lebanon’s General Security directorate must ensure that these men are not forcibly returned to Syria. Doing so could endanger their lives,” said Lynn Maalouf, Deputy Director for the Middle East and North Africa at Amnesty International.  Five of the six men are from the province of Daraa, southwest Syria, parts of which have been subject to a fierce regime siege and bombardment.