President Assad received the Iranian Foreign Minister, Hossein Amir Abdollahian, and his accompanying delegation to Syria, according to SANA. 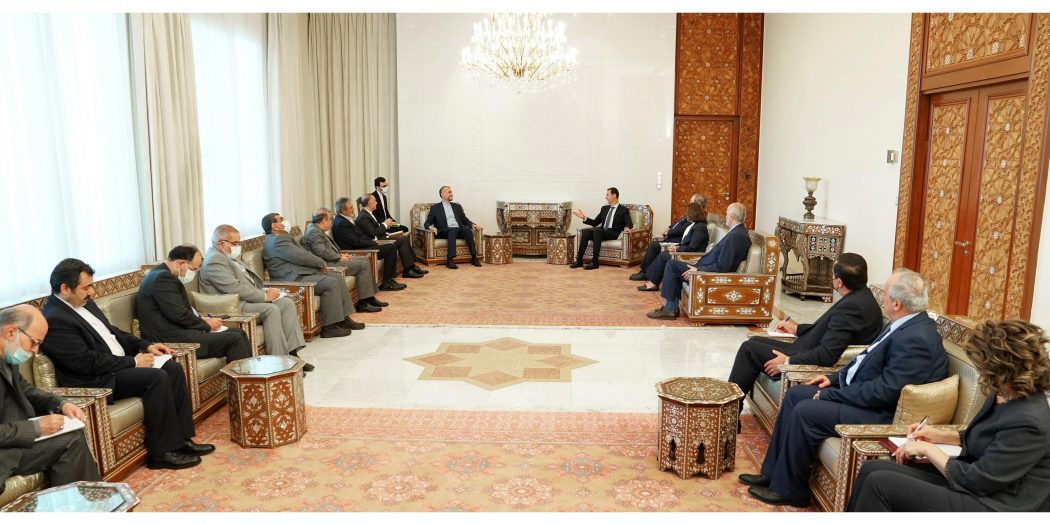 Minister Abdollahian briefed President Assad on the outcomes of “The Cooperation and Partnership” Conference held recently in Baghdad, with the two sides affirming that the region’s future is made by the will of its people and that constructive cooperation with other countries can be achieved through responding to their will away from interfering in the internal affairs of their countries.

President Assad stressed that the continuous cooperation between Syria and Iran has given positive results in protecting the interests of the two friendly countries and peoples, particularly in the field of combating terrorism.

The President also affirmed to the Iranian Foreign Minister that Syria will continue to combat terrorism until all the lands are liberated from it.

Abdullahian pointed out that Iran and Syria have achieved great victories in the war against terrorism thanks to the common will of the two countries’ leaderships, reiterating his country’s continued support to Syria and its people to confront terrorism in all its forms, especially economic terrorism and its repercussions.

On Sunday, Foreign Minister Faisal Mekdad had held a meeting with the visiting minister.

Regarding Iran’s participation in the Baghdad summit, Minister Abdollahian stressed that Iran’s stance was clear from the beginning, during and after the summit regarding the importance of coordination with Syria in all issues relating to the region, and that Iran has always been and still calls for coordination to be a key factor in the stability and prosperity of the region.

Viewpoints were in agreement upon rejecting any illegitimate military presence in Syria and unilateral coercive economic measures imposed on the peoples of the two countries, as well as supporting Iran’s stance with regard to rejecting Western attempts to interfere in its affairs, as well as with regard to negotiations related to the Iranian nuclear file.