Russia claimed that the U.S. military presence in Syria is illegal, calling Washington’s interpretation of resolution No. 2254 “ridiculous and ironic,” according to SANA. 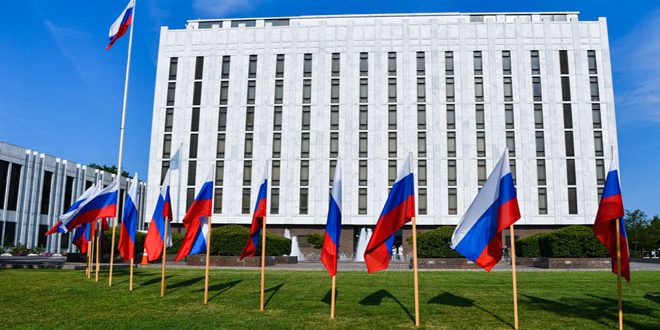 Russia has reiterated that the U.S. military presence in Syria is illegal, adding that Washington’s interpretation of resolution No. 2254 is “ridiculous and ironic”.

Earlier, Wayne Maroto, Spokesman for the illegitimate so-called “International Coalition” which is led by the U.S. under the pretext of fighting terrorism, claimed in a tweet that “the U.S. forces are deployed in Syria under international law and Security Council’s Resolution No. 2254 which was issued in November 2015.”

Read Also: U.S. Vehicles Filled With Syrian Oil on the Way to Iraq

TASS News Agency quoted the Embassy of Russia in Washington as saying, in a tweet commenting on these allegations, “the truth is that U.S. troops did not have any legal authorization to stay in Syria, and your interpretation of the Security Council’s Resolution No. 2254 is ridiculous. Please read the document carefully.”