In its annual meeting to discuss its future, the SDF emphasized its need for international financial, military and political support, according to North Press. 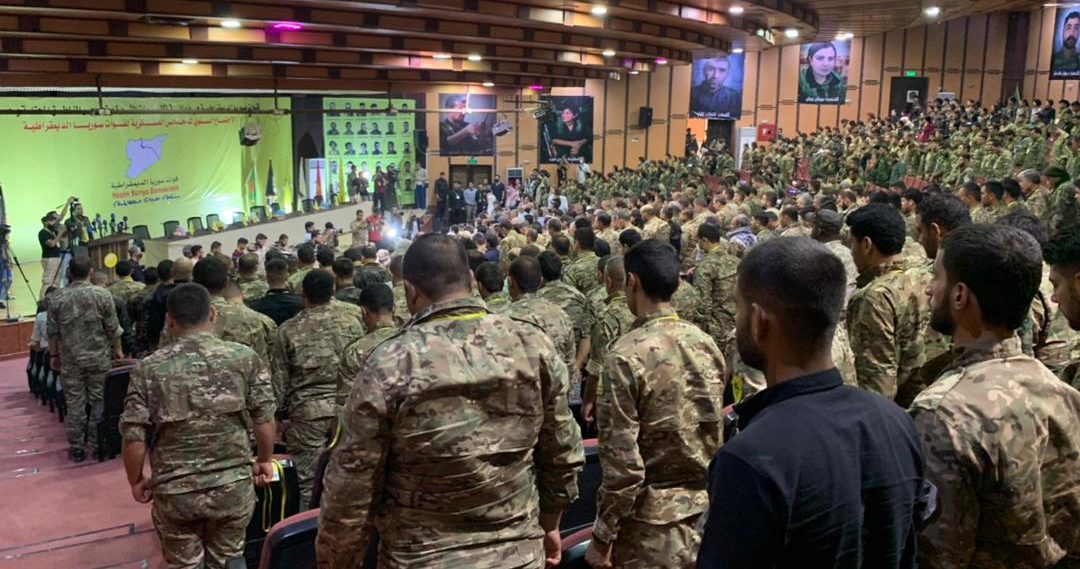 The Syrian Democratic Forces (SDF) have linked the final defeat of the Islamic State (ISIS) to the support for stabilization projects and rehabilitation of infrastructure in the region, by supporting the Autonomous Administration of North and East Syria (AANES) in its vision for the future.

A final statement of the meeting stressed the need to support AANES politically and economically to defeat ISIS, and achieve a sustainable victory.

The meeting was attended by leaders and delegations of all councils, military forces, and their institutions affiliated with SDF, with the participation of the leadership of the Global Coalition to Defeat ISIS.

“To reach a final defeat against ISIS, AANES’ projects should be supported and the international community must open a path for humanitarian aid access into Syria,” Abdi said.

The Autonomous Administration is trying to obtain international political recognition after years of Turkish efforts to prevent it from accessing international conferences and meetings regarding the war and the solution in Syria.

The final statement by the SDF also called for military support and fortifying the administration with tools that would enable it to enhance security and stability and ensure a better future for the people of the region.

The Global Coalition stressed that ISIS still poses a threat and that its members are active.

“ISIS was militarily defeated, and there is no longer an ISIS caliphate, but its members are still active in the region,” said Paul T. Calvert, the Commander of the Combined Joint Task Force – Operation Inherent Resolve (CJTFOIR).

However, the coalition commander avoided talking about explicit support for the AANES, and focused in his speech on working to improve the protection of prisons in northeastern Syria that house ISIS terrorists, noting that, “we will continue to emphasize the necessity of returning the citizens from Iraq and Europe to their countries.”

The demands of the SDF coincided with the amendments made by the AANES in its administrative and organizational structure, as it is working on a Social Contract, which is a constitution regulating its work.

From these amendments, the Autonomous Administration aims to repair deficiencies and fill the gaps in its work, according to statements by its officials.

The Autonomous Administration is seeking to hold local elections before the end of this year and after the completion of the amendment of the Social Contract, in an attempt to renew its administrative staff amid criticism of its performance in the recent period, especially in the service aspect.

The SDF’s demand for recognition and support of the administration was not directed at the Coalition and the United States only; Abdi also called on Russian forces operating in the region to play a greater role in securing stability.

Moreover, Abdi stressed the importance of intra-Syrian talks to solve problems with the central government to reach a political agreement, as “hostile statements by the regime fall in the best interest of no one,” he indicated.