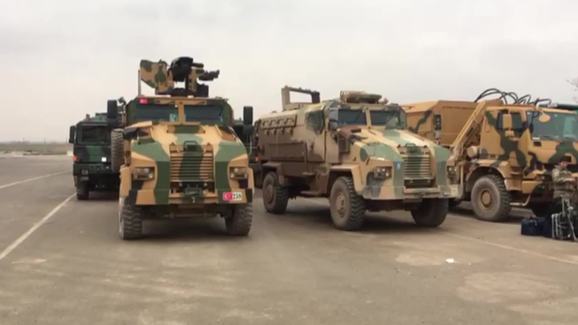 The Turkish military sent a new column of reinforcements to the northwestern region of Syria this week, following attacks on their forces in Aleppo Governorate.

According to a report on Saturday, the Turkish Armed Forces came under attack by sniper fire near the key city of al-Bab in northeastern Aleppo; this prompted the latter to respond with heavy artillery on the positions of the Syrian Democratic Forces (SDF) and People’s Protection Units (YPG).

The Turkish military has since sent reinforcements through the Kafr Lousen crossing that links the Hatay Province and Idleb Governorate.

Several reports on Sunday said that dozens of soldiers were transported to northwestern Syria, and were escorted by heavily armed vehicles that will likely be used on military patrols with their Russian counterparts in northwestern Syria.

Turkey has been deploying a large number of troops to northwestern Syria since 2018, when they first established observation posts in the Aleppo, Lattakia, Hama and Idleb governorates.

Most recently, the Turkish military has withdrawn from several observation posts after they were besieged by the Syrian army in early 2020.

The Turkish Armed Forces reportedly came under attack in the northeastern countryside of the Aleppo Governorate on Saturday, resulting in some casualties within their ranks.

According to opposition reports, the Turkish Armed Forces’ positions came under attack in the al-Bab District of Aleppo after snipers opened fire on their troops.

The reports said at least two Turkish soldiers were wounded and taken to a nearby hospital for treatment; their current status is unknown.