Syrian rebels have struck back after a devastating attack which left scores of fighters dead in the troubled northern province of Idleb reports Al-Araby Al-Jadeed. 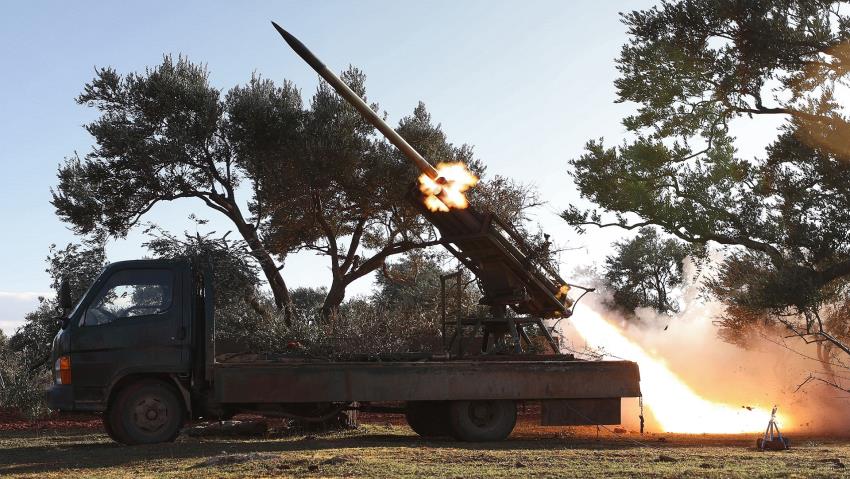 Syrian opposition forces on Tuesday shelled hit positions in the northwest of the country in retaliation for a Russian airstrike on Monday which killed scores of rebel fighters and broke a ceasefire agreement.

A regime official was also killed in the southern Syrian province of Daraa.

It follows Monday’s Russian strike on a training camp in Idlib province, which killed up to 100 Syrian fighters from the Failaq Al-Sham (Levant Brigade) group, which is part of the Turkish-backed National Liberation Front (NLF).

The strike took place despite a ceasefire guaranteed by Russia and Turkey that has been in place since March.

US Special Envoy for Syria James Jeffrey condemned the strike in a statement, calling it a “dangerous escalation”, adding that “it is time for the Assad regime and its allies to end their needless, brutal war against the Syrian people”.

A military source from the rebel group told The New Arab’s Arabic-language service that the retaliatory strikes by NLF forces hit regime positions in Dadikh and Maasaran in eastern Idlib province.

The source added that the regime had sustained casualties as a result of the bombing, without giving details.

Regime forces bombed the town of Al-Bara and the village of Fereika in southern Idlib, causing material damage.

Monitors say that regime and Russian forces are now violating the March ceasefire on a daily basis, but Monday’s attack on the Failaq Al-Sham camp was by far the deadliest since the truce was declared.

In Daraa, southern Syria, one regime official was killed and another injured in an attack by unknown assailants.

Abu Mohammed Al-Hourani, a media activist from Daraa, told The New Arab’s Arabic-language service that men on a motorcycle in the town of Sanamein had shot Abdel Salam Al-Hameid, the regime-affiliated leader of the town’s council, killing him instantly.

Mohammed Diab, an official from Syria’s ruling Baath Party, was also wounded in the attack.

Elsewhere in Daraa, a former rebel fighter who had previously reconciled with the regime was injured in another attemped assassination.

Daraa province was mostly under rebel control until 2018, when the regime launched an assault on the area and opposition factions agreed to a Russian-sponsored agreement which allowed the regime to take control of the area.

Since then it has been restive however, with frequent anti-regime protests and assaults on regime checkpoints and officials.

The Syrian conflict began in 2011, following the brutal suppression of pro-democracy protests by the Assad regime. More than 500,000 people have been killed and millions more displaced since then, mostly as a result of regime bombardments of civilian areas.