A new report has highlighted the rise in the number of early marriages taking place in Syria and the problems that can arise when children are married off writes Sowt Al-Asima. 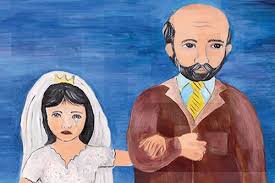 Syrians for Truth and Justice recorded an increase in early marriage cases over the last three years in several regions in the north of the country.

The organization stated in its report that it has observed a remarkable increase in early marriage cases, “with the rate of early marriage in Idleb and the northern countryside of Aleppo exceeding record numbers by leaps and bounds.”

The organization drew attention to the ordeals that young Syrian girls face, as a result of being forced or persuaded to marry, in Idleb, the northern countryside of Aleppo, and Hasaakeh Governorate.

The organization’s report is based on 18 testimonies and interviews, including 11 testimonies from girls who married at an early age (some of whom were forced to marry), in addition to three testimonials by relatives of girls who realized the bad effect of marrying them off.

The report quoted a women’s rights activist in Idleb, Alia al-Rasheed, who said that child marriage rates in the governorate have increased in the past three years, exceeding 73 percent. An informed source stated that the rate of early marriage in the northern countryside of Aleppo reached 60 percent of the total number of marriages.

Hassakeh saw fewer early marriages this year than last year, according to data from SARA, an organization for combating violence against women.

Arzu Tammo, in charge of the organization’s abused women committee, said that 36 cases of child marriage have been documented in 2020 thus far, while a total of 46 cases were documented in 2019.