Farmers in Ras al-Ayn are being forced to accept lower prices for their crops, because of marketing delays and corruption writes Zaman Al-Wasl. 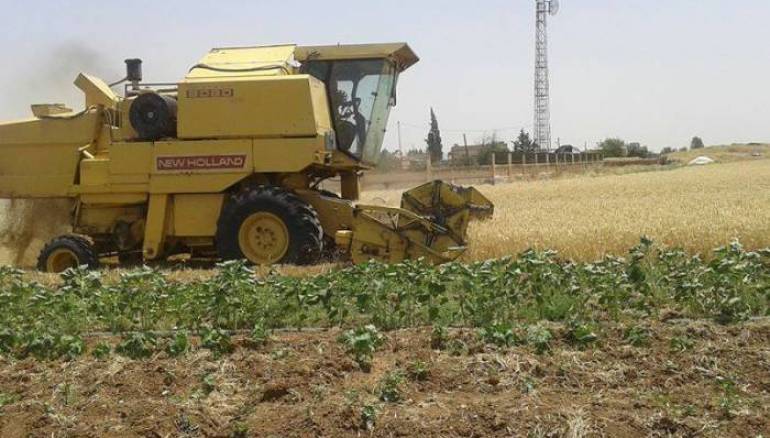 Two months after the harvest in the Turkish-held Ras al-Ayn region, farmers are still unable to sell their crops, amid complaints of the slow marketing process from Tel Abyad to Turkey during the past month.

Buyers are exploiting the situation to push the farmers to sell at very low prices, with one trader, known as al-Boushi, going from buying wheat from farmers at 130 dollars to 125 dollars.

Mohamed Issa, 50, was forced to sell his barley crop at 160 dollars (70 dollars/Kg) because of the delay.

Issa said that the local council asked them to create a PTT account as a first step towards the marketing of their crops, without any results so far. Despite Turkey setting the prices at 1,175-1,650 Turkish lira per ton of wheat and 1000-1100 lira per ton of barley, buyers are not paying more that 350-360 Syrian pounds for the wheat crop.

The delay in opening the border gate and the dispute over who should run it are a couple of the reasons for the hindrance.

The taxes imposed on farmers are likely to be similar to the percentage specified in Tel Abyad, where the farmers are also complaining about the slow process due to corruption and favoritism towards products and merchants associated with the factions. By Aug. 10, 2020, 120 people had had their turns, while between 350–400 trucks have been waiting for a week.

The farmers who get their turn, deliver their crops to the Turkish Grain Board near the border gate, where specialists determine the purity and quality of the crop and fix a price. After 20 days of marketing, around 75 farmers received the price of their crops via the PTT bank account.

The Syrian National Army, the Local Council and the Shamiya Front represented by the company Sanabel share 15 percent of the farmers’ crops in exchange for marketing them, which the farmers pay to avoid being exploited by merchants.