Russia has launched a deadly aerial attack on the city of al-Bab, as they continue to apply pressure on Turkey to gain advantages in both Idleb and Libya reports Baladi News. 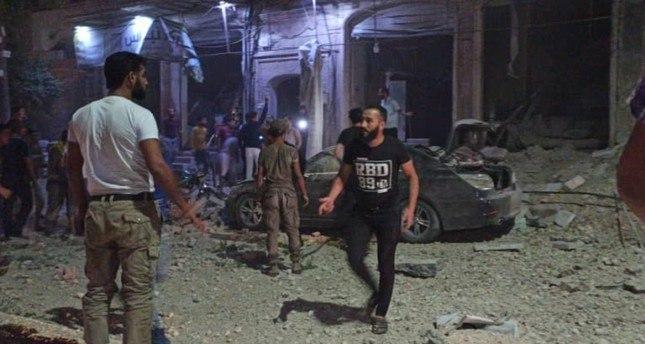 On Wednesday night, Russia bombed the city of al-Bab in the eastern countryside of Aleppo, resulting in a number of casualties and extensive damage to property and residential buildings.

This is the first time that the city of al-Bab has been bombed by Russian warplanes since the Syrian and Turkish National Army laid siege to the city, following the expulsion of the Islamic State in 2017.

What is the message that Russia wants to deliver to Turkey by bombing al-Bab?

Maj. Youssef Hammoud, an official spokesperson for the National Liberation Front, says that the message behind the strikes is not clear because the Russian-Turkish differences and disputes have become international and regional matters, mainly regarding Libya, so it is difficult to pinpoint what the Russians want, especially since their policies keeps on changing and are based upon quick and ill-considered decisions.

“In general, the message is clear, especially after Russia detected Turkey’s unwillingness to fulfil its demands with regard to Idleb and Libya,” Hammoud added in a statement to Baladi News.

Researcher Turki Mustafa said that, “the Russian escalation taking place in Idleb, as well as in al-Bab, is due to a Russian desire to exert pressure on Turkey and lead it to make concessions in Idleb, east of the Euphrates, and Libya.”

Speaking to Baladi News, Mustafa added that, “there are no indications of a looming battle in Idleb because Russia is unable to fight against Turkey for economic and political reasons, nor will there be a battle east of the Euphrates,” noting that the ongoing escalation is Russia pressuring Turkey to compromise with regards to the Syrian and Libyan issues.