Syrians were unable to withdraw funds from cash machines on Monday, due to a problem with the Lebanese company that provides the service writes Sowt Al-Asima. 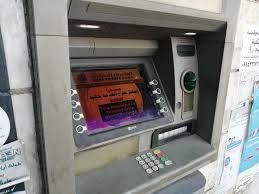 All private banks in Syria suddenly halted their ATM services and cards, “because of a problem with the Lebanese company providing this service.”

Syrians were surprised on Monday at the holdup when they tried to withdraw funds, news site Iqtissad reported. It later became clear that there was a problem from the Lebanese side, according to statements released by the banks.

Bank of Jordan-Syria said in a statement that its exchange services had halted, adding that this included all branches.

The bank noted that the reason for the issue was a problem with the company in Lebanon providing this service. There is a joint effort between the bank and the Central Bank of Syria to find a solution, the statement said.

Al-Baraka Bank-Syria, for its part, said that ATM services had stopped until further notice due to technical issues outside the bank’s control.

An employee in the private banking sector said that all private banks work with the Lebanese CSCGroup, which supplies ATM machines and cards, as well as electronic payment services, and was behind the surprise holdup with Syrian banks.

Most private banks recently announced that they had raised daily withdrawal limits for ATMs, with withdrawals for Al-Baraka Bank reaching 200,000 Syrian pounds.