Coronavirus infectons rise, Syrian celebrate Eid, more Syrian travel to Libya, crops burnt in Hassakeh and Idleb resident demand to return to their homes. Catch up on everything that happened over the weekend. 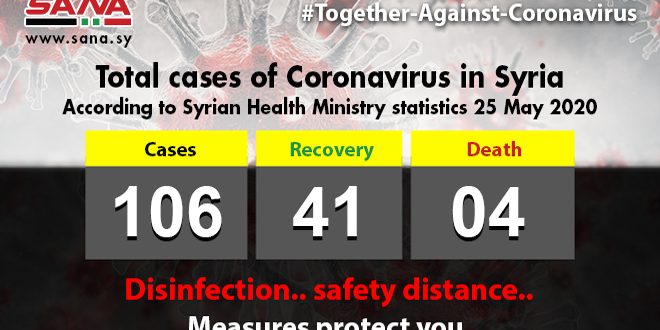 1. The number of coronavirus infections in Syria has risen to 106 as the Health Ministry announced on Monday 20 new cases among Syrian citizens who recently returned home on Syrian flights from several countries. According to SANA, 15 of the new cases were in Syrians who came back from Kuwait, three from Sudan and one was from Russia. The Health Ministry said that lab analysis results of a suspected coronavirus case in a Russian person at Tartous port was negative.

2. On Sunday, for the first time, the Syrian people performed Eid al-Fitr prayer in their homes in response to the precautionary measures taken to tackle the coronavirus, after the Jurisprudence Scientific Council of the Ministry of Religious Endowments closed mosques SANA reported. The mosques broadcast Eid al-Fitr Takbeers via the minaret as usual.

3. The Syrian Observatory for Human Rights reported on Sunday of the arrival in Libya of a new batch of 500 fighters from the Syrian factions loyal to Turkey, who will participate in military operations alongside the Government of National Accord. The monitor said that the number of recruits who have reached Libyan territory from Syria so far has reached about 10,100 mercenaries. The observatory stated that the number of recruits who arrived in the Turkish camps to receive training amounted to about 3,400 people.

4. SANA reported that pro-Turkey militias, “resumed their crimes against locals and their properties, as they set fire to wide areas of farmland in many villages in Tel Tamer and Abu-Rasin in Hassakeh countryside.” Local sources said, “groups of pro-Turkish mercenaries on Sunday morning, set fire to many wheat and barley fields in al-Dawadiyah, Mulla Nuri, al-Arisha, al-Jameelia, and Abdul Salam and al- Azeeziya villages in Tel Tamer and Abu-Rasin in the Hassakeh countryside”. The sources said that Syrian Arab Army units deployed near the area rushed to assist locals in putting out the fires.

5. Turkish Defense Minister Hulusi Akar announced on Monday, the neutralization of 1,458 terrorists in northern Iraq and Syria since the start of the new year, Anadolu Agency reported. He added that neutralizing these terrorists came within the framework of counter-terrorism operations in northern Syria and Iraq, where the outlawed Kurdistan Workers Party (PKK) is active.