Residents in Aleppo have expressed their anger at plans by Hay’at Tahrir al-Sham to open a commercial crossing with the regime reports Brocar Press. 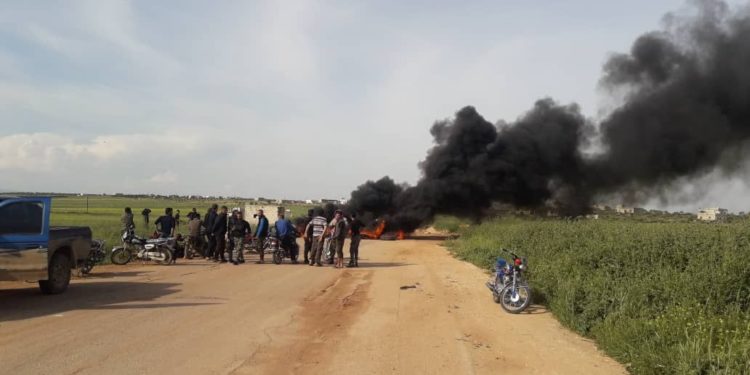 As Hay’at Tahrir al-Sham prepares to open a a commercial crossing with the Syrian regime between rural northern Idleb and western Aleppo, Turkish forces near the town of Shallah in northern Idleb placed earthen berms on Monday along both sides of the highway leading to the town of Maarat al-Naasan, local activists say.

According to activists, the earthen barriers placed by Turkish forces block the passage of large commercial trucks on the highway leading to the new crossing that Tahrir al-Sham intends to open between the two towns of Maarat al-Naasan in northern Idleb and Miznaz in western Aleppo.

The placement of the barriers comes after local residents protested on the road leading up to the new crossing, expressing their rejection of the commercial crossing with the Syrian regime.

A correspondent for Brocar Press said Monday evening that the protesters had cut off the road between Maaret al-Naasan and Miznas with burning tires.

An administrative official in Tahrir al-Sham’s department of crossings said  that, “the liberated area exports 50 percent of its goods and products, while it imports five percent from the regime and 95 percent from Turkey.” He added that 90 percent of experts go to Syrian regime-held areas and the other 10 percent to Turkey.

In a conversation with Tahrir al-Sham-affiliated outlet Ebaa, the official said that, “without exports, residents of the liberated areas would be living only on aid, and everything that affects the prices of local goods would be prevented from being exported so as to avoid damage.”

Despite justifications given by Tahrir al-Sham, news of the opening of the commercial crossing was met with a wave of anger on social media, by displaced people who hope to return to their towns and villages after being driven out by the Syrian regime.

Commenters wrote on social media that opening the commercial crossing constituted explicit normalization with the Syrian regime, and “a betrayal of the blood of the martyrs and the Syrian revolution.”

After a wave of popular anger, Tahrir al-Sham retreated temporarily from opening the commercial crossing near Saraqeb in eastern Idleb, though it hinted that it would open the crossing from another point, according to the Tahrir al-Sham public relations office.

Tensions increased in the past two days between Tahrir al-Sham and Turkish forces over sit-ins that prevented Russian patrols along the Aleppo-Lattakia international highway, and their attack by Turkish forces, which led to the deaths of four demonstrators including a Tahrir al-Sham member and a member of Tahrir al-Sham’s police force.