Turkey has started the process to give citizenship to the families of fighters that were killed during Operation Peace Spring reports Zaman Al Wasl. 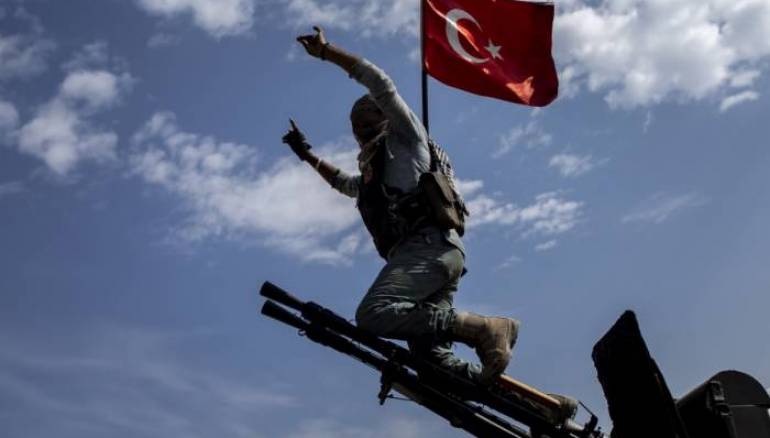 According to a well-informed source in the 1st Legion, Turkey has recently demanded lists of their names, in order to grant their families citizenship, similar to what previously occurred after Euphrates Shield and Olive Branch operations in the northern and eastern countryside of Aleppo.

The source clarified that, “The decision includes the wife and children of every Syrian fighter who lost their lives during the battles. If the fighter was not married, citizenship will be granted to his parents, as well as to his unmarried siblings.”

The Syrian National Army is an umbrella group in northern Syria consisting of an assortment of rebel forces. Many of the group’s factions, made up largely of Arab fighters, had already fought at Turkey’s behest in two previous military operations over the past three years.

According to the source, the list included over 350 names, with the Turkish government receiving all information related to their families in addition to copies of all of their official documents. The source suggested that the families would be granted other privileges such as: a free apartment for each family, as well as financial compensation estimated at 40,000 Turkish lira.

The source said the list is still in the review stage, a process that requires time and effort. Each family must go through several preliminary interviews with Turkish delegates, in order to verify that their conditions are met and to ensure the validity of their data.

Some citizenship files for the families of fighters killed during the Operation Olive Branch in January 2018 were rejected, and some of them are still waiting for the opportunity to obtain Turkish citizenship, without knowing the reasons for refusal or delay, the source said.

Simultaneously, Turkish military representatives have secretly asked some leaders of operation factions to provide them with other lists, which include their names and the names of their relatives to grant them Turkish citizenship as well. The whole issue is relative, varying from one faction to another, based on the degree of loyalty to the Turks, and the number of candidates ranges between five and ten people.

On Oct. 13, 2019, during the military operations against the US-backed Syrian Democratic Forces (SDF), the Syrian National Army took control over Tel Abyad and Suluk, on the Syrian-Turkish border.