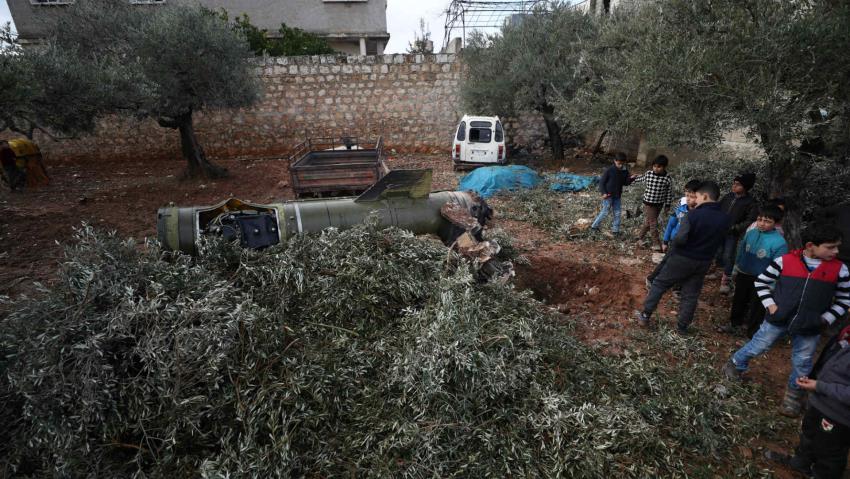 A deadly ballistic missile strike by Syrian regime forces on a school in the country’s northwest on New Years’ Day used a banned cluster munition warhead, and can be classed as a war crime, according to Human Rights Watch (HRW).

The strike killed 12 civilians, including 5 children aged between 6 and 13, and injured at least 12 more children as well as a teacher, as they studied at the Abdo Salama School in the town of Sarmin, Idlib governorate.

HRW’s Crisis and Conflict director Lama Fakih strongly condemned the regime’s attack in a statement on Wednesday: “After years of killing and maiming children in brutal attacks, the Syrian government starts the new decade by using a banned weapon to kill more children and their teachers.”

“The Syrian government should cease its repugnant use of cluster munitions and attacks on schools and hold accountable the officials who authorised it,” she added.

Cluster munitions are banned under the international treaty, Convention on Cluster Munitions, over their widespread and indiscriminate effect which can inflict huge and long-lasting damage to civilian life.

“Cluster munitions typically explode in the air and send dozens, even hundreds, of small bomblets over an area the size of a football field,” HRW pointed out in their report.

Pictures after the January 1, 2020 attack showed remnants of submunitions and the rocket motor used to launch the missile scattered around the school and surrounding area.

In a statement, HRW said all the information gathered on the attack indicates it violated the wars of law which serve to prohibit deliberate or indiscriminate attacks on civilians.

International law also bans attacks on civilian targets, including hospitals and schools, during wartime. However the Syrian regime and its Russian backers have flagrantly violated these regulations.

Daily strikes on camps, markets and other residential areas, as well as hospitals and schools, have killed scores of civilians in Idlib and the surrounding opposition-held territory despite a ceasefire having been agreed between Russia and rebel-backer Turkey on January 10.