An intense air campaign by the Assad regime and Russia have force tens of thousands of people from their homes reports Enab Baladi. 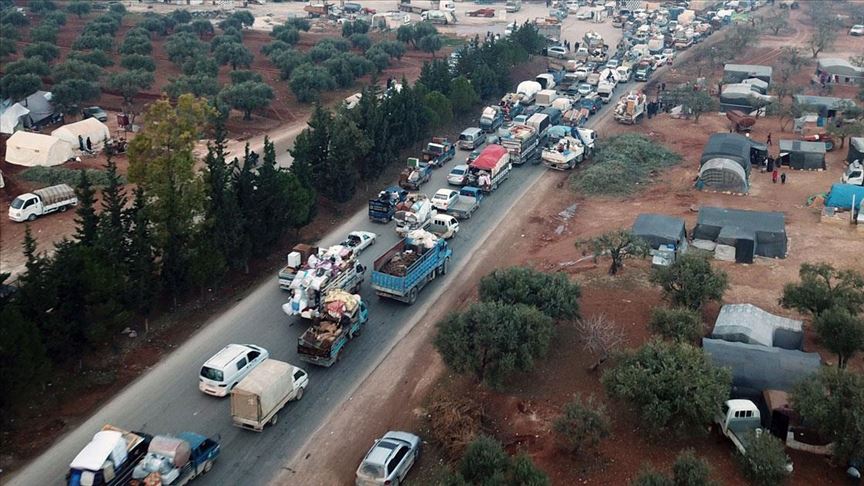 More than 26,000 civilians from southern and western Aleppo countrysides were displaced during air and missile bombardments of the area by Assad’s and Russia’s forces.

The Humanitarian Response Coordinators in the North issued a statement on Sunday in which they said that the number of displaced people heading from the southern and western Aleppo countrysides had reached 4,698 families (26,779 individuals) more than 73 percent of them women and children.

The team called on all local and international actors to respond to the recent displacement and warned against returning displaced to the area, and called for allowing freedom of movement of the displaced to all areas.

The villages and towns of the southern and western Aleppo countryside have in recent days been subjected to an intensified air campaign by the Assad regime and Russian forces in an escalation accompanied by the arrival of Assad reinforcements to the front lines with the opposition.

The bombardment resulted in dozens of civilian victims, mostly families, women and children, as well as a major displacement, that has not been seen in the Aleppo countryside in recent months.

According to the Humanitarian Response Coordinators, the displaced are spread throughout the Euphrates Shield and Olive Branch areas as well as the camps and safe zones in the Idleb province, falling on the Turkish-Syrian border.

Assad’s forces with Russian backing are still continuing their military campaign against Idleb province and the Aleppo and Lattakia countrysides, despite Turkey and Russia declaring a ceasefire last week.

The Assad regime justified its campaign against the towns and countryside of western Aleppo by citing the bombardment carried out by Hay’at Tahrir al-Sham on the areas where it operates in Aleppo city.

With the western and southern Aleppo countrysides, the bombardment is currently affecting the southern and eastern Idleb province, coinciding with attempts to advance on the ground by Assad’s forces toward the strategic city of Maarat al-Nu’man.

There is no sign painting a clear picture of the future of Idleb province so far, especially given the that last few days have seen a reshuffling of the cards by the “guarantors,” whether Turkey or Russia, as well as the United States.