Airstrikes continue to pound northern Syria, with one killing a family that was fleeing from the rebel-held city of Ariha reports Al-Araby Al-Jadeed. 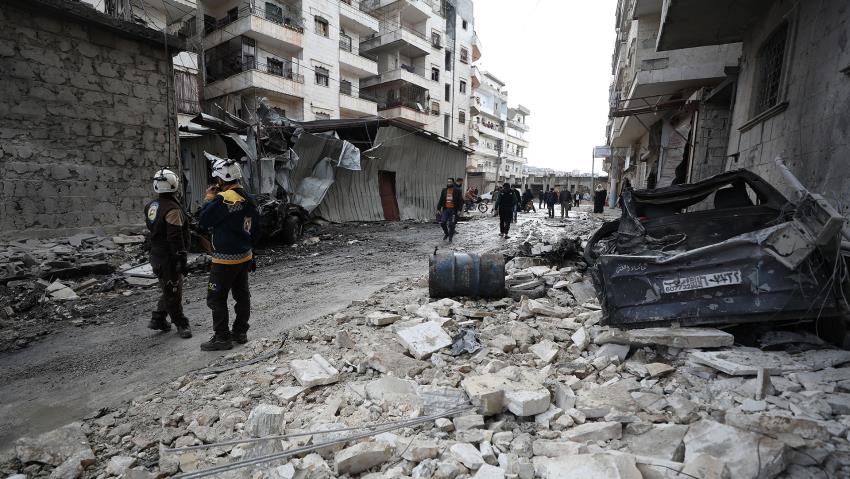 At least 17 people have been killed in regime and Russian airstrikes in Syria since Sunday, monitors have reported, with more than a dozen people losing their lives in strike targeting refugees in the rebel-held city of Ariha, northern Idlib province.

The Syrian Civil Defence’s, better known as The White Helmets, media centre in Idlib said that eight children and two women were among those killed in Ariha, while dozens of people were injured. The White Helmets published the names of those killed, who ranged in age from 10 to 75.

A correspondent for the Syrian television station Orient News said that a regime plane had dropped a bomb on the M4 road, which connects the port of Latakia to Aleppo and eastern Syria.

The highway passes through Ariha, and the airstike hit a refugee family sitting near the road.

A woman and a child were also killed in an airstrike on the city of Saraqeb this morning, while the Syrian Civil Defence said that two people were killed by another bombing in rebel-held western Aleppo province.

The regime and its ally Russia have intensified their deadly airstrikes on opposition-held Idlib province since 15 December, killing hundreds of people. It is believed that Russia and the regime want to take control of the strategic M5 road which links Damascus to Aleppo and the Turkish border.

Some horrors cannot be swallowed down in the line of duty. Our White Helmet is consumed with grief as she cradles the lifeless body of a mere child struck down and killed by the regime massacre in #Ariha City in #Idlib today.

Nearly 300,000 people have been forced to flee their homes by the regime strikes since the middle of December, according to the United Nations. The city of Maaret al-Numan, which once had a population of 110,000 is now almost totally deserted.

The Syrian first responders team told the UN Security Council on Monday that a total of 1,294,558 people out of Idlib’s estimated 4,350,000 inhabitants – 28.8 percent of the total population – had been displaced in 2019 and that 526 civilian facilities, including schools, hospitals, and markets had been destroyed in regime and Russian strikes.

Many people fled to Idlib province from other parts of Syria earlier in the country’s nine-year conflict, after being displaced or expelled from their homes by regime advances. Aid agencies fear a humanitarian catastrophe if regime airstrikes continue, especially amid winter conditions.

“Winter conditions are exacerbating the dire humanitarian situation,” said Farhan Haq, a UN spokesman, last Friday. “Families are fleeing in torrential rain and temperatures at night are close to freezing.”

Many of the recently displaced refugees live out in the open because there is no room for them in refugee camps and places of shelter.

More than 500,000 people have been killed in Syria since 2011, when the regime brutally suppressed pro-democracy protests, triggering an armed uprising.