An image of a crying women has led to an outpouring on social media and renewed calls for the international community to take action over Idleb reports Al-Modon. 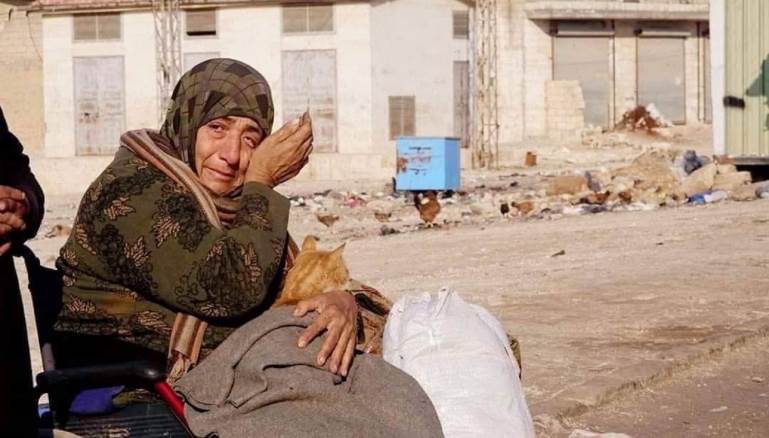 A video clip of an elderly Syrian woman fighting back tears as the she speaks about the conditions for her family in the city of Maarat al-Nu’man in the Idleb countryside due to the heavy bombardment there, has sparked an outpouring of comment and emotion on social media.

In the clip, the woman calls on the world to look at what is happening in terms of the bombardment, killing and displacement of residents into the severe cold and into the unknown. An image also in circulation of the woman holding a cat also received widespread acclaim on social media, as people praised her for saving the cat and not forgetting it despite the conditions.

Syrian activists launched a digital campaign in solidarity with the residents of Idleb, choosing the color blue to indicate the sky as a symbol for the campaign, accompanied by phrases such as, “No guarantor but God; only the sky is open to Syrians without a visa or a border.” It also used the hashtag #Idleb_under_fire, in Arabic, English and Turkish, in a reference to the Assad-Russian campaign against the province and in response to the lack of mobilization by any countries to stop the barbaric bombardment against civilians there, despite the agreements signed between the opposition and the regime with Russia, Iran and Turkey as guarantors since 2017.

The activists repeated phrases such as: “The sky is the refuge for the displaced fleeing from regime and Russian bombardment, especially after cars of displaced people have been struck repeatedly on the roads while fleeing from Maarat al-Nu’man and the southern Idleb countryside in northern Syria.”

Regime and Russian forces have stepped up an unprecedented land and air bombardment over the last few days despite the “truce” declared at the end of August. The Humanitarian Response Coordinators said on Sunday that more than 38,000 families in northwestern Syria had been displaced between the start of November up until Dec. 21, 2019, noting that 225 civilians had been killed, including 74 children, during the same period.