Civilians in Idleb flee to the Turkish border, Russia and China uses their veto at UN, Christmas celebrated in Aleppo and Syrian regime push advance. Catch up on everything that happened over the weekend. 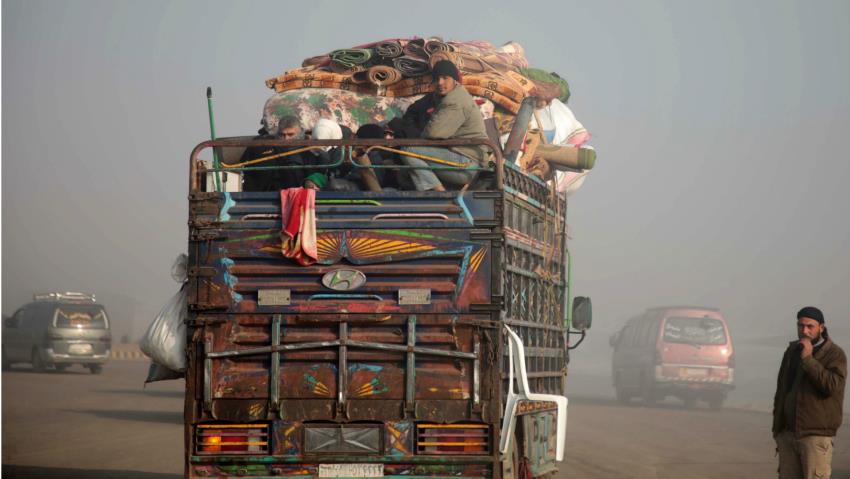 1. At least 80,000 Syrians have moved closer to Turkey’s border over the past five days following intense attacks by Bashar al-Assad’s regime, Russia and Iran backed-groups in northern Syrian, the Director of Syria’s Response Coordination Group Mohammad Halaj said Friday. Halaj said at least 180,000 civilians in Idleb had been displaced since the beginning of November due to the attacks. He said Russia and the regime have attacked hospitals, schools, mosques and houses to force civilians out of the city and keep them away from their homes. The Response Coordination Group collects data on displaced people in Idleb, which is supposed to be a de-escalation zone, where acts of aggression are expressly prohibited.

3. On Sunday, Russian-backed Syrian regime forces continued their offensive on the last remaining opposition stronghold in the country’s northwest, getting very close to a Turkish observation post in the area, Asharq Al-Awsat reported. The shelling and airstrikes of opposition-held villages in Idleb province on Sunday, killed at least one civilian. The offensive has already forced tens of thousands of civilians to abandon their homes and flee, including thousands who crossed into neighboring Turkey seeking safety. The attacks resumed after a cease-fire, which had been enforced since the end of August, collapsed.

4. Hundreds of Syrians have flocked to Aleppo’s al-Aziziyeh Square to participate in the Christmas tree lighting ceremony, according to SANA. Nowadays, people in Aleppo celebrate Christmas, as peaceful life re-establishes itself in the city, two years after its liberation. In the Syrian city of Aleppo, Christmas is considered to be a very important holiday.

5. Syria regime forces have seized dozens of towns and villages in northwestern Syria from their jihadist rivals following days of violent clashes, a war monitor said Sunday. The fresh advances in Idleb province bring regime loyalists closer to capturing one of the largest urban centres in Syria’s last major opposition bastion, the Syrian Observatory for Human Rights said. “This push is an attempt to get closer to Maarat al-Nu’man,” Observatory head Rami Abdul Rahman added.