Despite a ceasefire being imposed in the area, Russia is still conducting airstrikes in the northern province of Idleb reports Zaman Al Wasl. 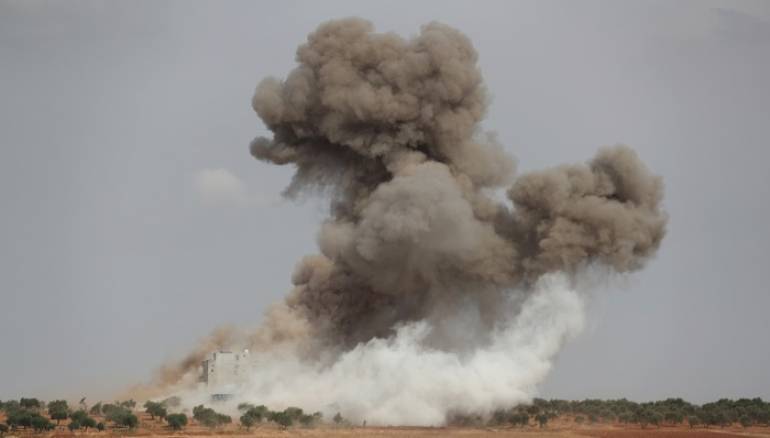 At a meeting in Damascus, Russian officials discussed with Bashar al-Assad the need to de-escalate the situation in northeast Syria, Russia’s foreign ministry said on Saturday. The statement was delivered as a heavy bombardment hit northern Idleb province.

The Civil Defense Agency said regime forces backed by Russia have carried out 4,251 airstrikes on northwestern Syria since last April.

Last September, Turkey and Russia agreed to turn Idleb into a de-escalation zone where acts of aggression are expressly prohibited.

Under the deal, opposition groups in Idleb would remain in areas where they were already present, while Russia and Turkey would carry out joint patrols in the area to prevent a resumption of fighting.

The Assad regime and its allies, however, have consistently broken the terms of the cease-fire, launching frequent attacks inside the de-escalation zone.

Since Turkey and Moscow hammered out the deal on Sept. 17, 2019, some 950,000 civilians have been displaced. During the same period, a total of 1,282 civilians have been killed by Russian or regime airstrikes, among them were 219 women and 341 children, according to Anadolu Agency.

The de-escalation zone is currently home to some 4 million civilians, including hundreds of thousands of people who have been displaced in recent years by regime forces from other parts of the war-weary country.

Russia has long been accused of carrying out systematic attacks against hospitals and clinics in rebel-held areas as part of a strategy to help Assad secure victory in the eight-year-old war.

The Russian Air Force has repeatedly bombed hospitals in Syria in order to crush the last pockets of resistance to President Bashar al-Assad, according to an investigation by The New York Times.

The 12-hour period beginning on May 5, 2019, represents a small slice of the air war in Syria, but it is a microcosm of Russia’s four-year military intervention in Syria’s civil war. A new front in the conflict opened this week, when Turkish forces crossed the border as part of a campaign against a Kurdish-led militia.