The US Defense Department said the attack targeted leaders of Al-Qaeda north of Idlib in Syria. It did not say what kind of weapon was used or give further details reports Al-Araby al-Jadeed. 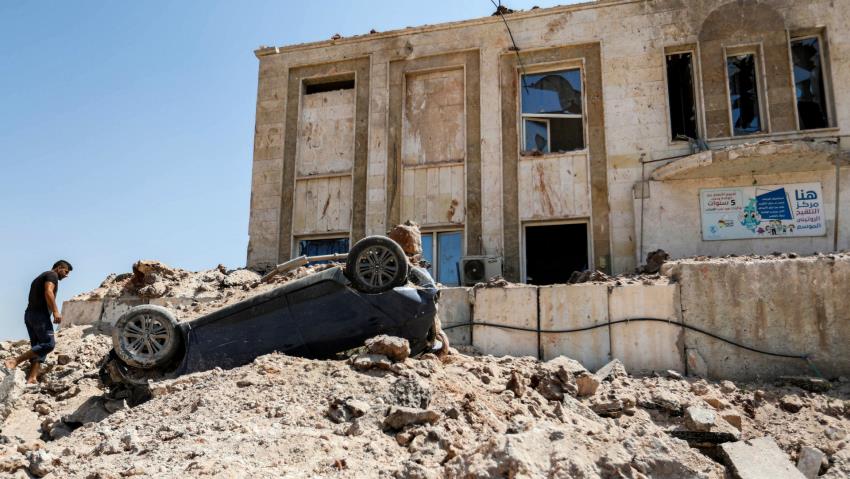 US forces attacked militant leaders in Syria on Saturday, the Pentagon said, in what a battlefield monitor called a missile strike that left at least 40 dead.

The US Defense Department said the attack targeted leaders of Al-Qaeda in Syria north of Idlib. It did not say what kind of weapon was used or give any details.

The missiles targeted leaders of militant groups and allied factions near Idlib, the Syrian Observatory for Human Rights said.

Syrian regime airstrikes on the opposition-run Idlib region had stopped on Saturday, after the regime agreed to a Russia-backed ceasefire following four months of deadly bombardment, the monitor said.

But “a missile attack targeted a meeting held by the leaders of Hurras al-Deen, Ansar al-Tawhid and other allied groups inside a training camp” near Idlib city, said Rami Abdel Rahman, head of the Observatory.

The attack killed at least 40 leaders, the Britain based monitor said.

The US Central Command said in a statement that the attack targeted leaders of Al-Qaeda in Syria (AQ-S) “responsible for attacks threatening US citizens, our partners and innocent civilians. Additionally, the removal of this facility will further degrade their ability to conduct future attacks and destabilize the region.”

An AFP correspondent saw clouds of black smoke rising over the area after blasts rocked the jihadist stronghold.

Ambulances rushed to the site of the attack, which was closed off to journalists, he said.

It was not immediately clear if the missiles were launched from war planes or positions on the ground, the monitor said.

CENTCOM declined to say what kind of weaponry was used.

The truce that came into effect on Saturday is the second such agreement between the Syrian regime and militants since an August 1 ceasefire deal covering the Idlib region broke down only days after going into effect.

Russia-backed regime forces have been pressing an offensive against the major opposition stronghold in Idlib since April.

But Russia and Damascus are not the only players with a history of strike activity in the area.

On July 1 the United States said it had carried out a strike on Hurras al-Deen in northwestern Syria, in its first such operation there in two years.

Al-Qaeda-linked Hurras al-Deen was established in February 2018 and has some 1,800 fighters, including non-Syrians, according to the Observatory.

The group and its ally Ansar al-Tawhid both operate in the Idlib region and are members of a joint jihadist operation room that also includes Al-Qaeda’s former Syria affiliate, Hayat Tahrir al-Sham.

Most of Idlib province and parts of neighbouring Aleppo and Latakia provinces are controlled by HTS.

Syrian state news agency SANA on Saturday said the government agreed to the Idlib ceasefire deal, which Russia said aimed “to stabilise the situation” in the anti-government bastion.

But the army “reserves the right to respond to violations” by jihadists and allied rebel groups, SANA added, citing a Syrian military source.

The Idlib region is home to some three million people, nearly half of whom have been displaced from other parts of Syria.

Airstrikes by Damascus and Russia have killed more than 950 civilians since the end of April, according to the  Observatory.

The United Nations says the violence has also displaced more than 400,000 people.

The Idlib region is supposed to be protected from a massive government offensive by a Turkish-Russian deal struck in September 2018 that was never fully implemented as jihadists refused to withdraw from a planned demilitarised cordon.

“Russia and the Syrian government may be willing to give Turkey another opportunity to implement the terms of its September 2018 bilateral agreement with Russia,” said Sam Heller of the International Crisis Group.

“Alternately, this ceasefire may just be an operational pause for Damascus and Moscow to consolidate their territorial gains and prepare for the next phase of their offensive,” the Syria expert added.

Syrian President Bashar al-Assad, whose forces control around 60 per cent of territory, has vowed to reclaim the rest of the country, including Idlib.

Saturday’s truce is the latest attempt to avert a full-blown offensive, which the UN has said would result in one of the worst humanitarian “nightmares” in Syria’s eight-year conflict.

Only a few hours before it went into effect, a Russian air strike hit a health facility in Aleppo’s western countryside, putting it out of service, the Observatory said.

The UN has said 43 hospitals and clinics and 87 educational facilities have been impacted by fighting since April.

“The attacks we have seen on health facilities, educational facilities and water points is one of the highest in the world,” Panos Moumtzis, the UN’s Syria humanitarian chief, told AFP.

The Syrian conflict has killed more than 370,000 people and driven millions from their homes since it started with the brutal repression of anti-government protests in 2011.