Following a meeting between the presidents of Turkey and Russia, Turkish soldiers have started patrols along the Aleppo-Lattakia highway reports Al-Modon. 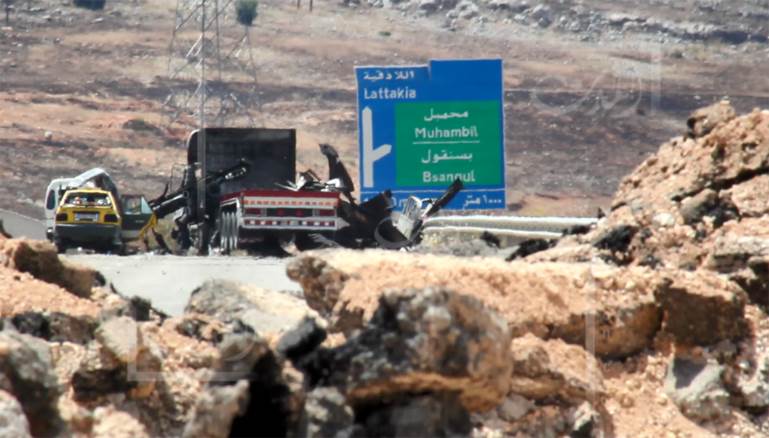 Turkish military patrols for the first time on Wednesday surveyed various positions on the Aleppo-Lattakia road, known at the M4 highway, with the aim of setting up observation points to oversee and ensure the security of the road, according to Al-Modon’s correspondent Ahmed Murad.

Activists shared videos showing the deployment of Turkish armored vehicles near the town of al-Nayrab west of Saraqeb accompanied by cars from Faylaq al-Sham. The Turkish patrol observed the government buildings that were used by the regime when the regime was in Idleb. From these centers it went to the al-Shababiyeh camp in Nayrab between the towns of Ariha and Saraqeb, and then the al-Qarmeed workshop, one of the main regime military camps and its last stronghold in Idleb. These positions run alongside the M4 highway.

A military source in Saqour al-Sham told Al-Modon that the Turkish military patrols and their survey of the points along the international highway was a clear translations of the results of the meeting between the Turkish and Russian presidents on Tuesday. The fate of the Aleppo-Damascus M5 highway between Maarat al-Nouman and Saraqeb remains unknown, as Russian aircraft are periodically heavily bombing the two cities and the villages along the highway, according to the source.

The source expressed fears that the Turkish patrols will avoid Saraqeb, which is the one point where the M4 and M5 intersect, heading west toward Nayrab and near Ariha.

The presence of the Turkish patrols for the first time on the Lattakia-Aleppo road sowed terror among residents, as the presence of Turkish observation points meant that regime forces would reach the international highway and expel residents from the areas to the south. This means the regime would take control over most Idleb cities opposed to the regime with high population densities, and which are the most important revolutionary strongholds—Maarat Nouman, Ariha adn Jisr al-Shughour, as well as Saraqeb—because they fall alongside the two roads which are a cornerstone of the Sochi agreement.

The results of the Turkish reconnaissance mission remain unclear, such as the Russian-Turkish agreement around Idleb. However, indications are that observation points will be set up along the road leading to the M4 sea outlet, with the distribution of roles among the guarantors and military factions in the region to be determined later.

It is expected that Turkey will select deployment points which the regime previously held along the international highway up to Jisr al-Shughour, with these positions distinguished by high levels of fortifications and being located between major cities, as well as their positions overlooking the surroundings.