In a television interview, Dr. Bouthaina Shaaban has said that history must be written to remember the honourable sacrifices of the martyrs and the pains of the wounded writes SANA. 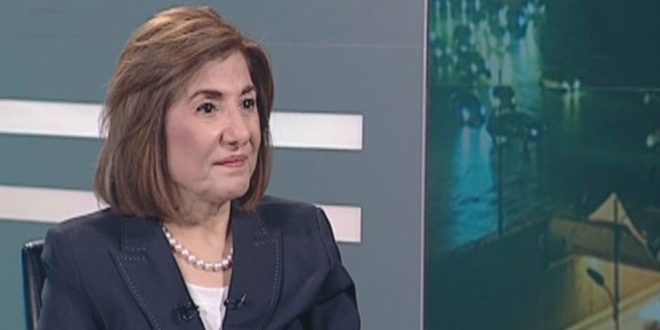 President Assad’s Political and Media Adviser Dr. Bouthaina Shaaban affirmed that the hostile war that has been waged against Syria for nine years is not only military, but it is also an intellectual and historical war that aims to destroy the country’s identity and history.

In an interview with the Syrian TV on Tuesday evening, Shaaban indicated that Syria will go on with its war against terrorism until it is completely eradicated, adding that the unjust war waged against Syria includes documenting what has taken place at all levels.

“History is in our hands and we translate it into all languages, to allow the world to read the reality of what took place in Syria and to document all the lies and illusions that have been created by the misleading Western media, which targets us, and to affirm that the heroism of the Syrian people is a main basis of Syria’s history. This will be read by all the people all over the world,” Shaaban said.

The Chairperson of the Board of Trustees of the Homeland Document Organization, which was founded in 2016, Dr. Shaaban noted that the organisation’s project aims to document the biographies of the intellectuals and the years of the war in all of its sides. The project was launched because of the desire to register the honourable sacrifices of the martyrs and the pains of the wounded.

Shaaban added that after years of fierce fighting, the Syrian people have proven to the whole world that they enjoy a high level of awareness and they adhered to their national principles and stances.

She affirmed that the unilateral coercive measures imposed by the US on Syria are illegitimate and they don’t have any international credibility, denouncing the latest threats by Washington against the attendees of the Damascus International Fair, which opened on Wednesday.

She added that the popular stance towards Syria has changed in many countries of the world, except those countries which have spent billions of dollars undermining Syria, asserting that these countries will change their stances in the end.

She noted that the current stage requires intellectual work, starting with dialogues between people and the exchanging of viewpoints.

Commenting on the Chinese “One Belt, One Road” project, Shaaban said that this project is a vision of the future of the world, as it is an economic, intellectual, research and social project, adding that the Homeland Document Organization works as a research center that provides the government with valuable ideas that serve Syria, whether in its historical role on the Silk Road or nowadays as part of the “One Belt, One Road ” project.