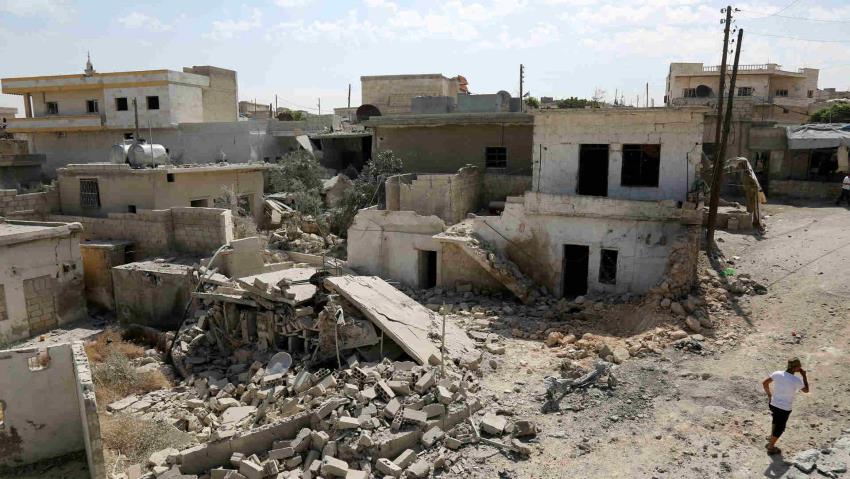 Russia and the Syrian regime restarted a campaign of intensive shelling and airstrikes on Wednesday evening across the northern province of Idlib, despite Moscow having announced a ceasefire agreement with Turkey just hours before.

The ceasefire aimed to put an end to the weeks-long campaign of intensified rocket fire and airstrikes by regime and Russian forces against the last opposition-held area in the country, which houses some 3 million Syrian civilians.

Local sources said that Syrian regime forces, supported by Russian warplanes, launched a campaign totalling 40 air raids on towns and villages across the southern Idlib countryside, as well as in northern parts of neighbouring Hama province. No casualties were reported.

Syrian and Russian forces also dropped more than 50 barrel bombs on towns in Idlib and Hama. Hugely destructive barrel bombs are usually fashioned out of oil drums, fuel tanks or gas cylinders filled with explosives, metal fragments or even chemicals and dropped from helicopters.

The regime’s barrel bombs are thought to have killed more than 11,000 civilians in Syria since 2012, according to Amnesty International.

Fierce clashes and heavy shelling also broke out on the ground between regime and opposition forces, as rebels attempted to regain control of the town of Qasabiya in southern Idlib.

Russia announced on Wednesday that it and Turkey, who supports the Syrian opposition, had brokered a new ceasefire for the war-torn province.

“At Russia’s initiative, with the mediation of Turkey and Russia, a ceasefire agreement was concluded in the Idlib de-escalation zone as of midnight on June 12,” the Russian Reconciliation Centre for Syria said in a statement late Wednesday.

“As a result, a significant reduction has been observed in the number of bombardments by illegal groups,” said the centre, which is operated by Russia’s armed forces.

However, no such ceasefire seemed to come into effect, risking the resumption of the regime’s bloody campaign against civilians.

The Syrian Observatory for Human Rights, a UK-based war monitor, said on Monday that 25 civilians including seven children had been killed in recent strikes, with more than 360 civilians killed since the end of April.

Syria’s war has killed more than 370,000 people and displaced millions since it started in 2011 with the repression of anti-government protests.

Russia launched a military intervention in support of President Bashar al-Assad’s regime in 2015, helping his forces to reclaim large parts of the country from opposition fighters and militants.