The continued assault by the Syrian regime and their Russian backers have forced 80 percent of the residents of Hazarin village to flee reports Smart News. 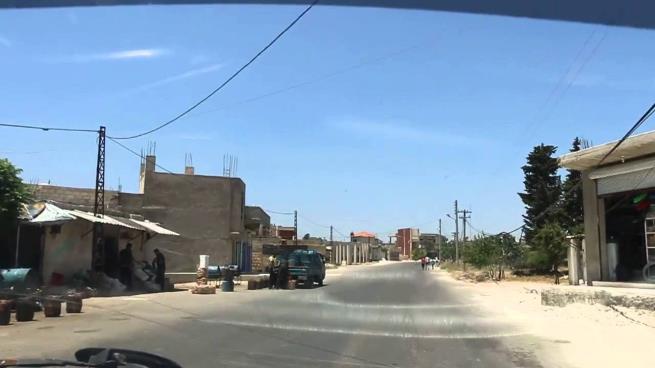 On Thursday, the local council for the village of Hazarin (38 km south of Idleb city) in northern Syria said that Russian bombardments and Syrian regime forces had destroyed more than 25 percent of civilian property in the village as well as public buildings.

The head of the local council, Nader al-Bassam, told Smart that the bombardment had caused “partial” damage to between 15 to 25 percent of civilian homes and had destroyed 13 homes entirely.

Life in Hazarin in the Idleb countryside came to a near-complete stop on Wednesday with stores shutting their doors and movement in the streets almost completely absent, while the impact of the latest bombardments were still clear in the town after a number of houses were leveled to the ground and turned into piles of rubble.

Bassam said that 25 shops had been 90 percent destroyed while the extent of the damage at the one medical point and the mosques was about 10 percent, and the three schools were about 20 percent destroyed, as well as the local council walls being cracked.

Bassam said that bombardment by regime forces and Russia, which has been going on for over a month, had displaced about 80 percent of the residents. The village had been inhabited by 10,000 people (1,150 families) including 3,000 people who had been displaced from other areas.

Bassam noted that the closest place with food and medical services was 15 km from the village, leading aid groups to offer aid to those who remained in the village and those displaced from it because of their terrible economic situation and the rising cost of renting homes in northern Idleb province.

On Tuesday, the two local councils for the villages of Maarat Hurmah and Hazarin had become “a disaster area” as a result of the heavy bombardment by Syrian regime forces on southern Idleb province.

Since the end of April, regime forces, with Russian backing; have been carrying out a heavy military campaign in northern Hama and in Idleb province, which has killed and wounded hundreds of civilians and displaced tens of thousands and created widespread damage to infrastructure and service facilities, despite being included in the Russian-Turkish deal that included the halting of bombardments on the area.