Between Apr. 29 and May 4, over 150,000 people have been displaced by regime and Russian ariel attacks reports Al-Araby al-Jadeed. 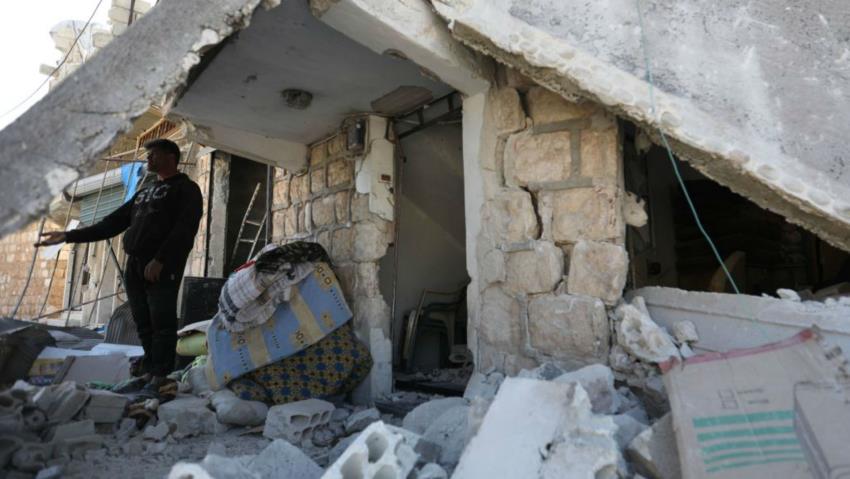 Tens of thousands of Syrians have been forced to flee their homes following a regime offensive in Hama province, while the situation in Idlib remains dire with hospitals and homes targeted in suspected Russian bombing, the UN has warned.

The World Health Organisation (WHO) said 150,000 people have been forced from their homes in Hama and southern Idlib in a ten-day bombardment, where a regime ground offensive and intense air strikes have led to a serious humanitarian crisis.

“We are also deeply concerned about the people who have had to flee their homes and now have no access to basic health services. Over 150,000 people were displaced from northern Hama and southern Idlib in between 29 April and 4 May, doubling the total number of people displaced in the area in the last three months,” said Dr Ahmed al-Mandhari, WHO regional director for the Eastern Mediterranean Region.

At least 12 health centres have been destroyed in suspected Russian airstrikes, while the regime have returned to devastating barrel bombing, killing civilians and decimating the opposition province’s healthcare facilities.

The health centres destroyed in the bombing – including three in one day – provided 30,000 consultations, 860 hospital admissions and 700 surgeries per month to a province already devastated by aid cuts.

“These attacks against health facilities and other civilian infrastructure are a grave and totally unacceptable development,” Mandhari added.

“International humanitarian law safeguards civilians, even in the most violent of conflicts. And according to the Geneva Convention, health facilities and civilians – especially the most vulnerable – must be protected. Parties to the conflict in northern Hama and in Idlib are flagrantly disregarding those rules; and it is women, children, the elderly and other vulnerable groups who are suffering as a result.”

The UN has come under criticism after health workers provided the body with coordinates to their facilities, following a week-long Russian and regime assault on Idlib, in a bid protect them from attack.

Activists say the fact that these facilities were hit during the bombing is proof they were deliberately targeted by the Russian airforce.

“Throughout the Syrian conflict, we have seen the regime and Russia target hospitals, in clear violation of international law,” Laila Kiki, executive director of the Syria Campaign told The New Arab.

“It is a cruel and brutal tactic to target medical centres, depriving the injured of potentially life-saving treatment. The hospitals that were targeted in the last few days were listed in the United Nations OCHA deconfliction mechanism and yet this was ignored by the regime and Russia.”

Around 50 towns and villages have been affected by fighting or bombing, with at least ten schools also destroyed in the regime assault, the UN added.

The Syria Campaign has said that 12 medical facilities have been destroyed in the past ten days of bombing, while three White Helmets centres have also been reduced to rubble and three of the civilian rescue workers killed.

With Turkey closing its border to Idlib, the province’s 3 million refugees have nowhere to go, while 350,000 internally displaced refugees living in tents are particularly vulnerable with no protection from the bombs.

Idlib has been covered by a truce agreed between Bashar al-Assad ally Russia and neighbouring Turkey last September, which prevented a planned regime assault on the province.

Armour has been sent to the regime frontlines with rebels, with many anticipating military operations in the demilitarised zone, or even an attempt to capture the whole of Idlib – the last opposition stronghold in Syria.

Bombing since February has forced tens of thousands to flee their homes, killing at least 364 people.