Following the agreement between Russia and Turkey, residents of Idleb province took to the streets to thank the Turkish President for all his efforts reports Enab Baladi. 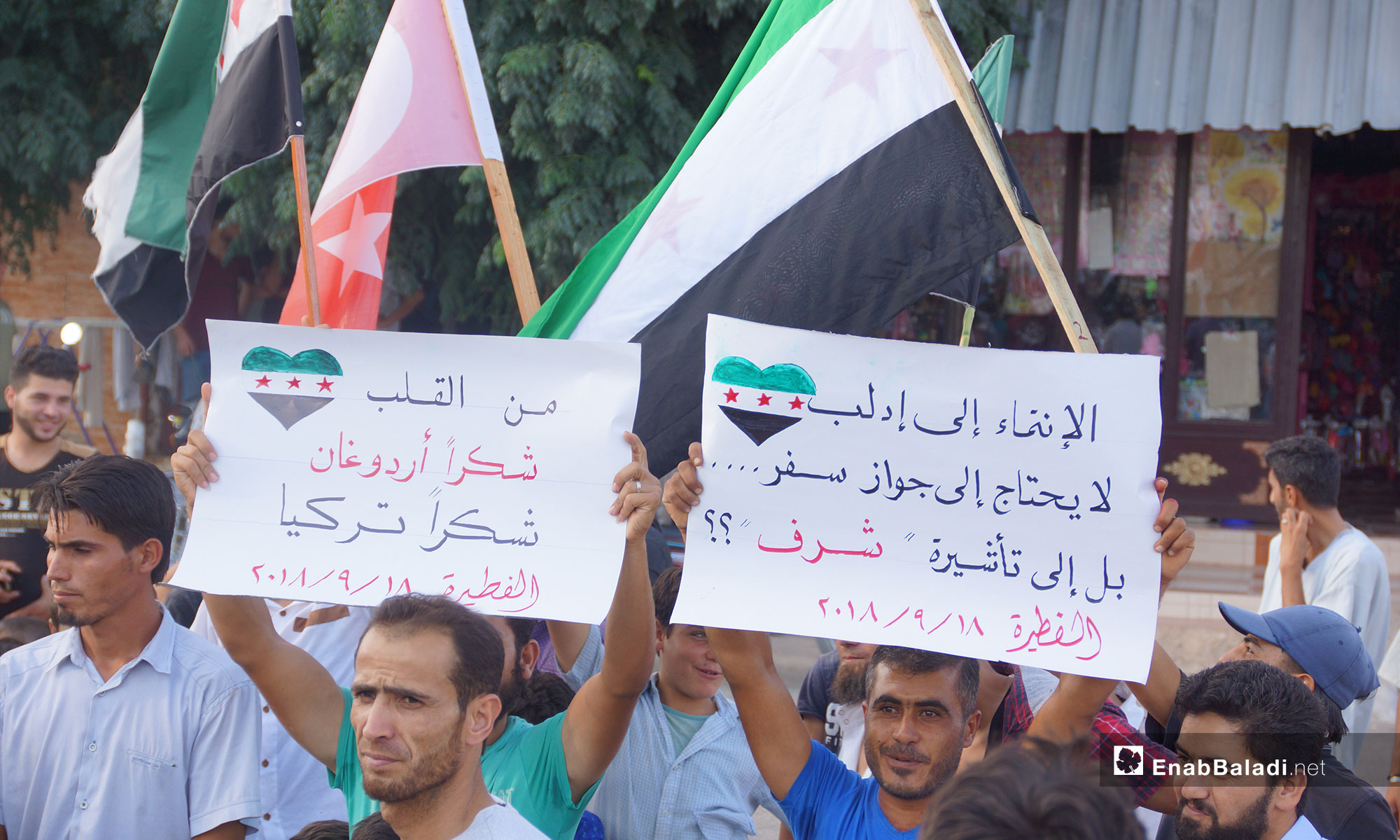 A number of areas in Idleb province have witnessed popular protests, which have thanked the Turkish government and President Recep Tayyip Erdogan for the agreement which has prevented a military assault on Idleb.

Enab Baladi’s correspondent reported on Sep. 19, 2018, that popular demonstrations broke out at various times in the towns of Binish, al-Fatira and Marshoureen, and shouted slogans thanking Erdogan and the Turkish army.

The demonstrations came after an agreement reached by Turkey and Russia that prevented a military assault on the province, the last opposition stronghold, with guarantees from the two sides.

The demonstrators raised banners saying: “Erdogan is a rose among roses,” and others saying, “Thank you Turkey,” expressing the happiness of residents at Turkish protection of the area, according to the correspondent.

That was accompanied by other slogans from participants which called for the demands of Syrians to be implemented, and confirmed their insistence on the Syrian regime leaving, as well as raising Turkish flags alongside the flags of the Syrian revolution.

On Monday, the Turkish and Russian presidents set up a demilitarized zone in Idleb province between the regime and the opposition.

The area will have a width of 15 to 20 kilometers and be under the observation of the two sides.

The agreement came after Assad’s forces mobilized around the area to begin a military operation against opposition groups, amid fears in recent days about the fate of the four million residents living in the province.

This was accompanied by wide-ranging threats from Assad’s forces and its Russian ally about the area being struck with chemical weapons — however, the Turks rejected any attack on Idleb after connecting the province to Turkish national security, and bolstering its military forces there.

Turkish Foreign Minister Mevlut Cavusoglu said: “The demilitarized zone will be cleared of extremists, while the residents and moderate opposition will remain in place, and a ceasefire will be achieved.”

He said that Turkey would add additional forces to the 12 observation points in the province.

According to the agreement, the M4 and M5 highways from Idleb will be opened at the end of the year, to stimulate commerce in the area — these are the Damascus-Aleppo and the Aleppo-Latakia highways.

According to the sources, joint patrols will be carried out in the zone, which will undertake the opening of the international route, without military factions which will not have any role there.