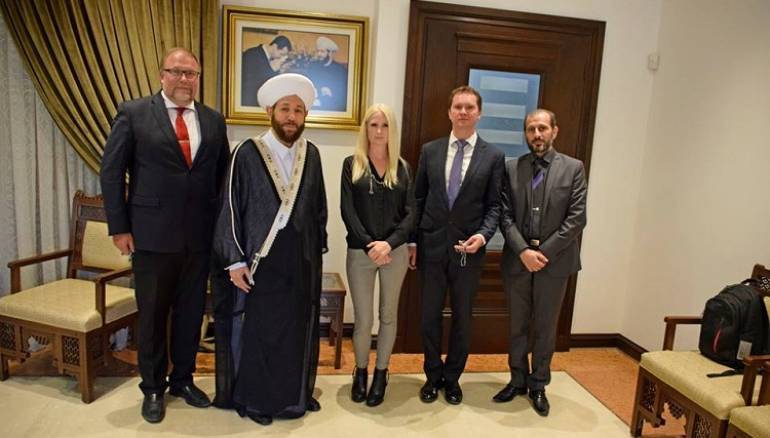 The Grand Mufti of the Syria regime, Sheikh Ahmed Hassoun, has warned the Europeans of the threat of mosques, calling them to besiege and close them, under the pretext of the Syrian experience with mosques, from which all the "problems" have erupted.

The recent statements by Hassoun were conveyed by a member of the extremist Swedish Right-wing party, Alternative for Sweden, who was part of a Swedish delegation that recently visited leading regime figures to take "commemorative photographs" with them.

Zaman al-Wasl checked the Facebook account of the Alternative for Sweden party member , Michael Janson, who was among the delegation and who took a photograph with Hassoun. In his Facebook post, he praised the "what he called the gentleness and understanding of Hassoun" also praised the “clarity of the Mufti " concerning the issue of the mosques in Europe, especially those funded by both Saudi Arabia and Turkey.

Hassoun insisted that mosques funded by Saudi Arabia and Turkey, are the cause of all the evil that has recently occurred in Syria. Therefore, according to him, the Europeans should be aware of these mosques and their leaders, and he suggested besieging and the closing down of these mosques, otherwise the Europeans will face the same fate as Syria.

The Swedish right, as the rest of the European Right, build their ideological discourse on hate speech, anti-Islamic discourse and proclaiming the islamization of Europe by bearded Islamic clergymen. But it seems that the Grand Mufti’s beard differs from the other beard.

In any case, this is not the main contradiction about the visit. The main and very serious contradiction of the visit has been ignored by the Swedish delegation. At a gather in 2011, Hassoun openly threatened Europe with suicide bombers -whom he calls “Istishadieen”- from Syria and Lebanon.

Hassoun, who was sitting to the right of Hilal Hilal, the highest Party’s official and civilian after Bashar al-Assad, went on to say: "We will prepare suicide bombers, from the ones who are currently living among you. From this day forwards, it is going to be an eye for an eye and tooth for a tooth, and you were the ones who started this .” He concluded by saying in this regard: "Do not approach our country. If you want to set fire to our land, Allah will burn your land with fire.

The Swedish delegation of Alternative for Sweden members recently took part in Swedish elections, and while they won an increased share of the seats, it was less than the Swedish right's overall plans and expectations.

The Alternative for Sweden party, which is similar to the German Alternative Party and its aggressive views, was keen to "diversify" the activities of their visit. They also met with the Speaker of the People's Assembly, Hammoudeh Sabbagh and his deputy Najdat Anzour, famous for his obvious praise of the regime.

The delegation also met with the Patriarchal Vicar of the Patriarchate of Antioch and the East of the Levant, Archbishop Luka El-Khoury, who is considered one of the leading figures of the pro-Assad church. He is a strong advocate of his ideas and is authorized to polish his image and present himself as a protector of Christians and a warrior of extremism.