Moaz al-Khatib, leader of the Western-based Syrian opposition coalition has resigned, citing frustrations with the body’s inability to advance the fight against President Bashar Assad. 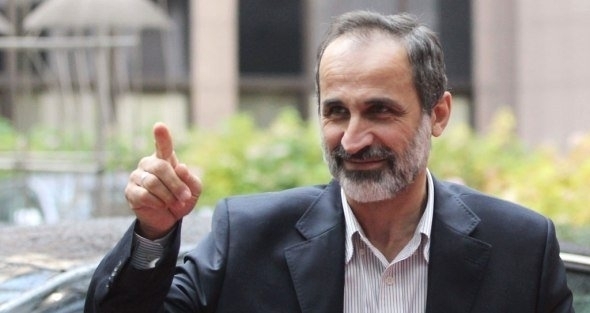 Moaz al-Khatib, leader of the Western-based Syrian opposition coalition has resigned, citing frustrations with the body’s inability to advance the fight against President Bashar Assad.

Khatib said in a statement posted on his Facebook page Sunday that he would continue to serve the opposition’s cause outside of the “the official institutions.”

Khatib was president of the Syrian National Coalition, which was formed last year to serve as the opposition’s official liaison with other countries and coordinate anti-Assad forces inside and outside of Syria.

Despite electing a new, US-educated prime minister last week, the coalition has failed to establish itself as the top rebel authority in Syria, where hundreds of independent rebel brigades are fighting a civil war against Assad’s forces.

In other news, Syria’s interim Prime Minister, Ghassan Hitto, will attend an Arab League summit next week at the urging of Qatar’s Prime Minster.

“We look forward to their participation in the Arab summit the day after tomorrow (Tuesday),” Sheikh Hamad in Jabr Al-Thani said at the opening of an Arab foreign ministers meeting in Doha, the Qatari capital where the summit will also take place.

Qatar’s prime minister welcomed the SNC’s appointment of Ghassan Hitto as provisional prime minister – an appointment which upset liberals in the coalition who said the SNC was becoming dominated by foreign influences and the Muslim Brotherhood.

The Arab League suspended Assad’s membership and recognized the Syrian National Coalition (SNC) as the legitimate representative of the people of Syria where a two-year civil conflict has killed more than 70,000 people.

Previously the League had said only that the Syrian political opposition and rebels should be supported by humanitarian and diplomatic means.

In a related development, U.S. Secretary of State John Kerry made an unannounced visit to Iraq on Sunday and will urge Prime Minister Nuri Al-Maliki to make sure Iranian flights over Iraq do not carry arms and fighters to Syria, a U.S. official said.

Washington believes such flights and overland transfers take place nearly every day and help Syrian President Bashar Al-Assad in his efforts to crush a two-year-old revolt against his rule, said the U.S. official, who spoke on condition of anonymity.

The U.S. official said the Iraqi government had inspected only two flights since last July and that Kerry would argue Iraq did not deserve a role in talks about neighboring Syria’s future unless it tried to stop the suspected arms flow.

“He will be very direct with Prime Minister Maliki about the importance of stopping the Iranian overflights and the transits across the territory or, at a minimum, inspecting each of the flights,” the official said.

Iraqi officials denied allowing the transfer of weapons from Iran to Syria through Iraqi airspace. Abbas Al-Bayati, a member of the Security and Defense parliamentary committee, said: “We have done our duty by randomly inspecting a number of Iranian flights and we did not find any leaked or smuggled weapons.”