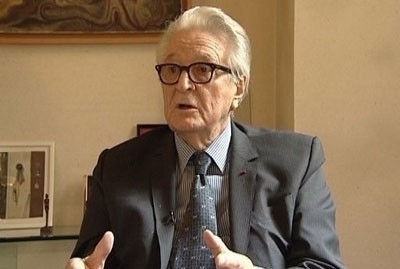 Several western countries – primarily Britain and France – had devised a plan to topple the Syrian the government even before the crisis began in March 2011, the former French foreign minister Roland Dumas has revealed.

In an exclusive interview to SANA in Paris, Dumas said he was invited to take part in preparations to topple the Syrian government by two people – a Frenchman and an Englishman –  while at a party in the U.K. before the crisis.

Dumas said he refused the offer, but that events proved that the plan was serious.

Dumas voiced surprise over the French government position, saying that the policies adopted by the governments of former President Nicolas Sarkozy and current President Francois Holland will not lead to peace in Syria.

On the west's goals from toppling the Syrian state, Dumas said that he believes the current international climate formed around the Syrian situation is contentious and reflect the policies adopted several years ago to deal with the Arab world. He emphasized that the west's policies are aimed at war, rather than peace, and stated his personal position against conflict.

Dumas said the Syrian opposition is multifaceted, and that countries including Qatar Saudi Arabia are directly involved in the fighting taking place inside Syria, against a legitimate government.

"A peaceful solution isn't achieved by letting people fight," he said, and stressed his belief that sending weapons will not solve the problems in Syria.

Dumas pointed out that, in a positive sign, legitimate government forces in Syria are reclaiming areas seized by gunmen. He also noted that France had initially opposed the idea of holding an international conference on Syria,  in contrast to its traditional political creed, but that eventually it admitted the conference must be held as soon as possible, also altering its position on Iranian  participation.

The most important point, he said, is that there is agreement between Russia and the U.S. on the need to hold the conference, noting that there mustn't be any preconditions for the talks.

Dumas said that misconceptions must be corrected, and then those who support certain policies will find they have been mistaken, but added it is still possible to reverse erroneous policies.