All the rumors about our family during the crisis arefull of baseless lies, Assad says 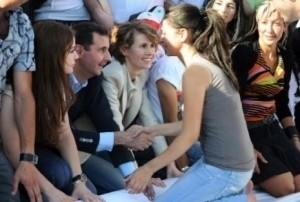 President Bashar al-Assad stressed that the government of Recep Tayyip Erdogan is responsible for the blood of tens of thousands of Syrians, the destruction of Syria’s infrastructure, and upsetting the stability in the region.

Assad warned in an interview with the Turkish “Halk TV” channel and Yurt newspaper that the presence of terrorists on Syrian-Turkish border, many of whom are supportedby Turkey, will have an affect Turkey in the near future, and that Turkey will pay a heavy price.

Assad pointed out that the Turkish [and Syrian] people are brothers, and it is very important that theywork continuously to protect Syrian-Turkish relations at the people's level, [despite] implications of what Erdogan had done towards Syria.

In response to a question about whether his brother Maher al-Assad is alive, Assad said: “All the rumors [that have circulated] about our family during the crisis arefull of baseless lies. We say here in Syria—and perhaps the same proverb exists in Turkey:There is no smoke without fire… in this case there was smoke without fire. He is alive, yes, and on top of his work and in good health.”