The Coalition is in crisis after mass resignations 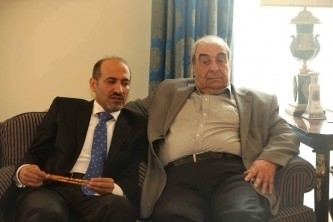 Informed sources have told al-Hayat that Tuesday’s meeting of the general commission of the Syrian National Coalition revealed the group was in deep crisis, after thirty members resigned.

Members of the political commission considered the resignations as a sign that some parties are attempting to form a parallel entity with a military wing supported by the rebel military alliance, the Islamic Front.

The latest crisis has complicated discussions over a final decision over participation in the Geneva II summit, to be held on 22 January.

The Syrian National Council, one of the main blocs in the Coalition, declared that it will not attend the conference and warned of withdrawal from the Coalition if it decided to participate.

An opposition leader told al-Hayat that discussions were underway Tuesday about the positive and negative effects of participation in the international conference.

Some members suggested delaying the decision in order to discuss the matter further with representatives of the revolutionary movement and the armed battalions, as well as other blocs that withdrew from the Coalition.

It is expected that this development will affect meetings in Paris on 11 and 12 January with the foreign ministers of London Group, which includes 11 countries aligned with the Friends of Syria groups of countries opposed to the regime.

It will also affect the meeting between the American Secretary of State, John Kerry and his Russian counterpart Sergei Lavrov on 13 January.

The opposition leader said the visit of Ahmad Jarba and Badr Jamous to Moscow on 13 and 14 January is still on schedule.

Jarba won 65 out of 120 votes in the Coalition’s presidential election, 13 votes ahead of his rival, the defected prime minister Riyad Hjab, who won 52 votes.

The bloc under the former secretary general of the Coalition Mustafa Sabbagh had previously lost the election in July, after the expansion of the Coalition, against the Democratic Front, headed by Michel Kilo.

A member in the Democratic Front said that there are attempts to negotiate with those members “but it is clear that that there is an intention to obstruct the meetings of the Coalition".

Another member said that the withdrawal came in the context of the efforts to establish an entity parallel to the Coalition, which includes some of the members of the local councils and businessmen, and that there is a possibility of coordination between this entity and the Islamic Front. The Islamic front was formed on 22 November. It is possible the Islamic Front may become the military wing for this entity.

The head of the military commission of the Islamic Front Zahran Alloush said that the participants in Geneva II, either from the regime or the opposition, are on a list of targets.