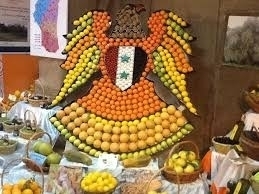 Latakia is considered to be one of the best Syrian cities with an Illiteracy percentage less than 4% of the population, mostly presented by seniors and wandering nomads living in the city's suburbs.

The two major production sectors in the city are agriculture and cervices. However, the real industrial sector is still absent, except some types of food and manufacturing industries which do not exploit more than 10% of the workforce. This is due to the lack of major factories for heavy industries or even small handicrafts.

Half of the province's population lives in the countryside. They depend majorly on three types of yields produced in large amounts that exceed the needs of the local consumption of the province.

Those yields come mainly from citrus cultivation, which had witnessed a considerable retreat in the space of its cultivating areas between 2000- 2010. This was due to the lack of its economic feasibility, where costs of production almost equaled the costs of disposal. Needless to mention the marketing difficulties, since the government have not made any real efforts to provide production markets. Marketing relied merely on the local producers themselves along with some mediators. This urged the farmers either to sell their lands for the sake of construction projects or leave their properties and search for another income sources.

Due to the product's low revenues; the government was not interested in  putting its hands on the marketing and production mechanisms. Furthermore, it practiced policies that destroyed the product. These policies were mainly presented by letting the traders import the same product from neighboring countries along with passing over the available excess. Additionally, the government raised the prices of fertilizers and treatment medicines in a way that did not suit the product's selling price. This gradually led to consider this tree, among farmers, to be a supplementary one in term of its productive value. Consequently, the numbers of this tree decreased. (e.g. a citrus cultivated land, an area of 3000 m2. Its annual net profit in 2005 reached approximately 70000 S.P. needs two full time workers year round)

In spite of being considered one of the main consumer products according to the Syrian nutrition system, olive could not overcome the production dilemma. The production amounts and prices did not achieve a reliable source for the farmers due to the lack of a systematic production development, which made the product dependent on the climatic changes and a subject to plant diseases. This forced the farmers to extract a large number of olive trees even before 2000. They replaced it with lemon trees which was considered to have a higher economical value back then. However, most of the farmers kept a sufficient number of olive trees, in order to provide their personal needs.

By this way, olive tree became one of the disregarded trees in the farmer's mentality.

The third product and the most important one, which was neither ignored nor disregarded by the government is Tobacco. It is one of the oldest agricultures in the coastal mountains. These mountains are the only area in Syria suitable for growing this product.

In 1774, there was an export center for the raw material across Europe and it was the reason behind the economical prosperity which the Syrian coast had witnessed back then.

The Syrian authorities interfered considering tobacco one of the strategic products and forced mountain residents to grow it in specific quantities defined by the government.

Authorities monopolized trading  in it as a row material and selling this material to any direction but the government became a felony that leads to severe punishment. Accordingly, two major factories were built to produce Cigarettes in each Latakia and Aleppo, where Cigarettes production was able to cover the local market along with some quantities that were set for export.

Billions of Syrian pounds and millions of dollars entered the government's budget from the revenues of this product which was rated as the merchandise with the highest income that entered the public treasury in 2005.

In the same time, the government carried out the worst economic performance with row material product and the factories. The government bought the product in the cheapest prices which urged a group of farmers to sell tobacco on the black market and take the risk of committing a felony.

I will present an example on the price of one kilogram of row tobacco in 2004. The government paid usually 100 S.P. per kilogram which is rated first-class quality, whereas the average production for one family that works in tobacco cultivating is about 500 kg, only the third of it, is considered good quality.

This means that the average annual production  for one family is estimated to reach 37500 S.P. and this needs 3 dedicated farmers and enormous efforts. Ironically, this same amount of tobacco produces an amount of cigarettes with the price of 400000 S.P.

The people who carry out the manufacturing process are the production workers. One worker manufactures seven times of this amount, i.e. 3500 kg tobacco to cigarettes with an average monthly wage reaches about 15000 S.P.

More than 20% of the workers suffer from cancer diseases and asthma due to poor working conditions, adding that the product with which they are dealing is already dangerous.

The government accomplished its plan to completely control this product which became a curse for its real producers. This plan began by giving the general management of tobacco production to its closest elite, in order to pass their shady bargains related to this industry.

Considering all these facts, agriculture production in general, became a burden for the coast people. Huge migrations began escalating the crisis in Latakia and other Syrian cities.

Latakia depends mainly on services industry such tourism, real estates, and consumption sectors. These sectors do not require a large workforce. Simultaneously, after 2000, the government gave the final blow to the main part of  services sector in Latakia which is tourism, by butting its hand on large areas of the marine peach which was possessed by Latakia's people. This was according to an article in the emergency low that allows the government to but its hand on any geographic area claiming the public interest. Then, government began dispossessing  lands ownerships, paying low prices as a reward to the real owners. Those lands were rented later by some Qatari companies (Qatari Diar company) in partnership with the government. These procedures were combined with executing the strongest punishment on anyone who disapproves. The punishment varies from arrestment to threatening to kill. This happened with one journalist who raised this point. He was detained for three months and threatened to be killed if he continues to go through  this issue.

No productive sector had been safe from the government's iron fist. The government seized every productive structure, transforming it to be more of a property than a private business. Working in such environment would be based on the level of loyalty for the government, in a total disregard to the efficiency standards.

Various services sectors had collapsed one after another under the strikes of corruption, robbery and loyalty.