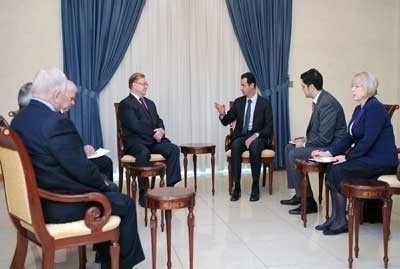 President Bashar Assad said on Wednesday that the Syrian people have no choice but to achieve victory in their war against terrorism and the extremist obscurantist thinking that is alien to Syrian society.

The President was meeting with a delegation of the Russia-based Imperial Orthodox Palestine Society, headed by Society's Chairman Sergei Stepashin.

Assad said victory can be achieved through firmly sticking to the diversity, moderation and intellectual enlightenment that have characterized Syrian society throughout decades.

He voiced appreciation for Russia's firm stance in support of Syria and his satisfaction with level of cooperation and coordination between the friendly countries.

He highlighted the important role which Russia plays in the international arena, which clearly contributes to drawing a new map for a multi-polar world that achieves international justice and serves interest of countries and peoples who adhere to sovereignty and independence.

Stepashin, in turn, expressed Russia's condemnation of acts of killing and intimidation perpetrated by terrorist groups against Syrian people and their various spectra, the latest of which was the assault on Kassab area on Syria's northern border with Turkey.