İskenderun District Governor Özyiğit dismissed the allegation and said the Turkish child hadn't been subjected to sexual harassment as alleged. 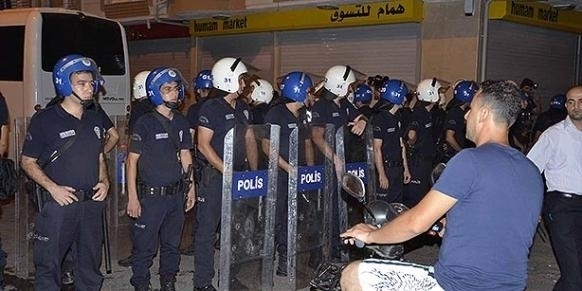 Locals in the İskenderun district of the southern province of Hatay poured into the streets and attacked Syrian shops after a Syrian youth allegedly sexually harassed a Turkish child. The alleged harassment has been denied by local officials.

According to local news agencies, residents of the Cumhuriyet and Barbaros neighborhoods took to the streets until late into the night on Tuesday after a 14-year-old Syrian boy allegedly sexually harassed an 8-year-old Turkish boy who went to a bakery run by Syrian citizens. Residents reportedly gathered in front of shops belonging to Syrian refugees and started to attack them.

Some protesters were injured during the tumult. Syrians who were afraid of being attacked closed their shops and left the area, news agencies reported. Police panzers and riot-control vehicles (TOMA) were dispatched to the area to disperse the angry crowd. İskenderun Police Chief Cengiz Başar, İskenderun District Governor Hasan Özyiğit and Hatay Provincial Police Chief Ali Doğan Uludağ also arrived at the scene of the incident.

İskenderun District Governor Özyiğit dismissed the allegation and said the Turkish child hadn't been subjected to sexual harassment as alleged.

The Hatay Governorate also issued a statement on its website late on Tuesday calling on locals to show restraint.

The governorate said in the statement that the Turkish boy wasn't subjected to sexual harassment following the results of a medical examination and the relevant formal procedures implemented by authorities in response to the incident.

“It has hereby been observed that there are some people and groups who want to incite our citizens against Syrians who, for humanitarian reasons, are now permanently living in our city,” the statement said, calling on locals to act with restraint.

Around 1.5 million Syrians fleeing the civil war in their country have taken refuge in Turkey and now live alongside Turkish residents and in refugee camps. The tension between the refugees scattered across Turkey and local residents appears to be growing, and more violent incidents involving Syrians are being reported.

Gaziantep officials decided to send around 7,800 Syrian refugees living in the city center to tent cities after a Turkish landlord was allegedly killed by Syrian refugees last week. Numerous demonstrations have taken place in the more densely-populated provinces of Turkey that have received many Syrian refugees, including Gaziantep, Kahramanmaraş and Adana.